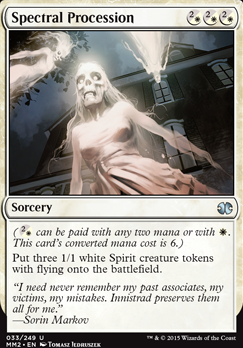 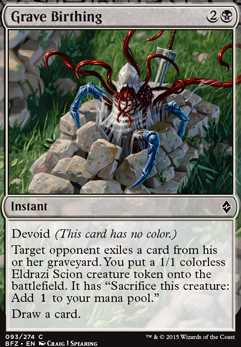 The other Weenies - Wb Tokens Aggro

The other Weenies - Wb Tokens Aggro

You should give Battle Screech a try! In a deck like this you can always do the flashback cost as soon as you cast it, so it's 4 fliers for 4 mana, pretty much an additional and slightly costlier Spectral Procession. It's one of my favorite token cards.

Also, on Caves of Koilos vs Godless Shrine, you're definitely taking less damage from the Shrine most of the time, even with fetchlands (and unlike Caves of Koilos it can be fetched). Koilos is definitely easier on the pockets though.

BrandonJamesCAC on Should I Add the Filter â¦

I have only used filter lands in B/W Tokens and Esper Control.

I've found that a good rule of thumb is if you have 4x of any card with triple color cost, run 2.

How about 4 Heliod, Sun-Crowned instead of 4 Ritual of Rejuvenation? The ritual gains you only 4 life and draws you just one card. That is a pretty terrible rate and does not really impact the boardstate. Heliod, on the other hand can act as a creature and is really hard to kill. His static ability is super good and is a great pay off for all the life gain in your deck. The 1W ability to give lifelink to a creature is also very important, as it can giver, for example, your 5/5 ajani's pridemate lifelink and gain you some life while giving it a counter. Odric, Lunarch Marshal also doesn't seem very good as it can only give lifelink, flying and firststrike. I feel like maybe one or two might be good in the deck since its legendary and does cost a lot of mana. Lastly, Aerial Responder doesn't seem to be particularly good. Sure, it has flying, firstrike and lifelink, but it is still a 3 mana 2/3. Something like Spectral Procession seems much better. It synergizes very well with the soul sisters and gives you 3 1/1 fliers. Combined with heliod and a few of the soul sisters, Spectral Procession can sometimes make 3 2/2 or 3/3 or maybe even 4/4 fliers!