Return each creature card with converted mana cost X from your graveyard to the battlefield.

Immortal Servitude occurrence in decks from the last year 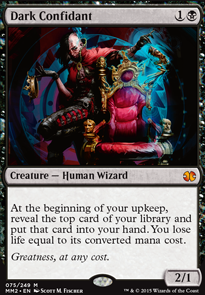 Lurrus Aristocrats (with primer)
by staggy97

Thanks for the upvote and feedback -Arcanity-.

Priest has been working wonders for me in standard. One tap from her and it's usually game so she's now a staple in the deck.

Interesting point about that other deck. I'd not seen that. Some great cards I've not considered like Fiend Artisan and Return to the Ranks (arguably better than Immortal Servitude?). I'll be adding these in as other options.

I'm still in two minds about Fatal Push. Hushbringer for example can grind our plans to a halt so a bit of a backup plan until we can get back on our feet can be useful. I've also been in situations where a priest activation only results in the opponent only having to sac a low value token rather than something more vital. But if the deck is as fast as you say, I might up the sac fodder count.

Hi BioProfDude, CMC restriction is only for permanents so Immortal Servitude is safe (thankfully).

Immortal Servitude has a CMC = 3, so won't work in the Lurrus of the Dream-Den deck, unfortunately.

Here's an idea: play it as a way to find Immortal Servitude or Rally the Ancestors, and dump every Persistent Petitioners along the way into the graveyard.