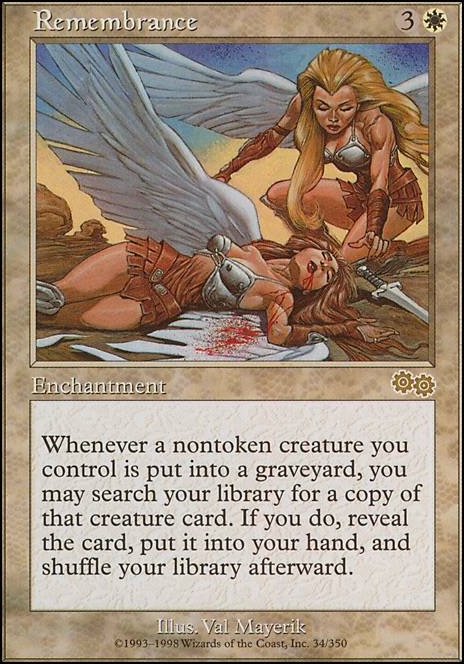 Whenever a nontoken creature you control is put into a graveyard from play, you may search your library for a creature card with the same name as that creature, reveal the card and put it into your hand. If you do, shuffle your library.

Remembrance occurrence in decks from the last year 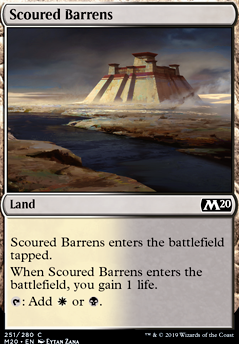 Nice day for a Black Wedding
by Zombrained

Us_marine91 - that is tough since the Shadowborn Apostles alone will cost you around $100 for 30 of them. That being said, I would suggest looking for cards with similar effects to the non-budget options in JLK's deck. For example, Vindictive Vampire and Cruel Celebrant are budget alternatives to Blood Artist, or Butcher of Malakir is a budget version of Dictate of Erebos and Grave Pact. Then I would look for cards that have effects which are "close enough" to some of the more expensive options. For example, Command the Dreadhorde, Bolas's Citadel, Pitiless Plunderer, and Dark Prophecy can all act as passable stand-ins for Remembrance (I can't believe that card has somehow crept up to $5!), Thrumming Stone, Black Market, and Phyrexian Arena respectively.

I'd also recommend checking out EDHrec's Shadowborn Apostle page. There you can see which commander's are used for that particular strategy. They also have a budget filter which may help you find some replacement cards.

Athreos, The Children of Shadows

tgood4 Iâve actually ran all those in previous iterations of this deck.

Remembrance messed up the Ripple effect from Thrumming Stone by thinning the deck of Shadowborn Apostle .

Secret Salvage is lovely, but the last I used it, letâs just say there were lots of issues. Maybe I give it another shot as I always thought of it as a second Thrumming Stone and that was an older build.

Rune-Scarred Demon was exchanged for Sidisi, Undead Vizier which was switched for Twilight Prophet . Ascend is easy to get and life gain is a lovely thing even if in small amounts.

Gray Merchant of Asphodel was removed only on the basis that itâs a one time shot with no real chance for recurrence in this build. Everyone will pay the 3 life to Athreos to prevent him from hitting again regardless of how much they already lost. Servitude and Salvage are also not warranted to use on him.

Zur the Apostle of Athreos

Hey I remember this from reddit! Very unique build. You might find room for Remembrance and Rally the Ancestors . Also Carnival of Souls can act as an extra Edgewalker, and Zur can find it.

It does the same thing that Secret Salvage does just slower but itâs a great back up.

KibaAlpha That's what I was missing. Secret Salvage is in my deck already. Does Remembrance let me grab every apostle out of my library?

In my opinion you should be running 30+ Shadowborn Apostle as well as have Secret Salvage and Remembrance .