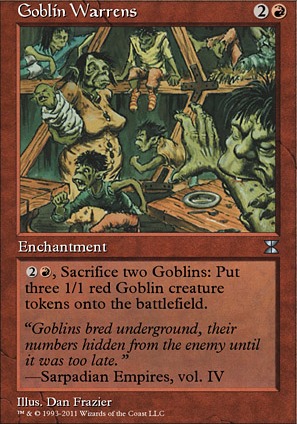 Goblin Warrens occurrence in decks from the last year

GhostChieftain on Your silliest wins ever?

The Hammer Is My Penis

my only regret is that I have but one upvote to give.

Pentavus turns into an etb trigger

Spawning Pit lets you lose only half your tokens to a board wipe, but they come back as 2/2s

Thopter Assembly becomes stupidly good if you can get rid of thopters fast enough.

Not sure what your budget is for this deck, but Coat of Arms and Shared Animosity are great ways to crash with a horde of goblins!

Mana Echoes is a great way to generate lots of mana, potentially just by tapping Krenko! Umbral Mantle is yet another way to untap your general to continue emptying the Goblin Warrens ."

one better on Fellwar Stone would be Mind Stone . The difference between them is that fellwar will quite possibly be tapping for, essentially, colourless mana and that's it. Mind Stone , on the other hand, will tap for colourless mana AND can draw you a card if you start to flood. This cannot be done with Fellwar Stone , and since you have 36 lands that add R in some way, you're probably never going to need it to tap for ...

Also, there's a bunch of stuff in the deck that either isn't needed or there's far better substitutes -

Some cards you may want to put in the deck instead would be:

or, for a less budget-friendly approach:

Zealous Conscripts is an infinite combo piece with kiki , since his ability is unconditional, meaning your stuff, your opponents' stuff. you basically get infinite mana if you have an Ashnod's Altar out, and you also deal infinite damage with Purphoros out.

kiki-jiki is just generally great in Purphoros EDH , since you can copy your Emrakul's Hatcher , SG Commander or Solemn Simulacrum (also thins deck and draws cards) each turn.

Vandalblast is generally good removal in red decks, as it's a one-sided artifact wrath, and if not it's just a Shatter , which is still not bad. Fiery Confluence is kind of the better-but-worse version of this, as it's more versatile, treated as a pyroclasm effect, or as additional pings from purphoros , or as artifact removal, just...less.

Solemn Simulacrum is generally decent - gets a land out of your deck, draws a card when it dies. Not much bad.

Panharmonicon is AMAZING!!! basically, you play an emrakul's hatcher and you get 2 triggers, giving you +1 mana potetial, and then you got 7 creatures into play, so that's 7 triggers from purphoros... but he's also ETB, so you get 14 triggers

Goblin Warrens isn't really that amazing, but you basically get +1 goblins, and 3 triggers for , which can just slowly eat at your opponents' life totals.

Empty the Warrens is also kind of similar, as you'll only ever really be playing it for 6-8 goblins, but that's still a solid 12 damage for 4 mana (value).

Kher Keep is quite similar, as I find with my deck that there are often better options at hand (literally. hehe...), but it is still, I guess, an emergency situation, last stand sort of thing, where you have just such dead draws, and so you just get to ping for each turn.

If you feel like your deck still doesn't get to a comfortable position with its mana, you can consider the following:

These cards will surely help you out. Although Gauntlet of Power will also potentially benefit your opponents, should you really care if they're just going to die in a few turns? Probably not. For just less than Caged Sun . Essentially, based of what I just stated, Gauntlet of Power is better (and Gauntlet of Might is best - less again XD).

in addition to the Gauntlet effects, you could add in this little series of mana rocks. Mind Stone can replace Fellwar Stone , for reasons stated previously, but then on top of that, there is Hedron Archive , which can draw you 2 cards, and Dreamstone Hedron draws 3. I don't really think that the two expensive ones really conform to the deck as well, but they're still considerations, I guess.

So, most of these cards aren't really that exciting. Avatar of Fury is pretty solid, but doesn't really interact with Purphoros much, apart from being a creature...

Guttersnipe definitely doen't fit in. You're running 23 spells, and I'd say that you'd need to run closer to 40 spells to consider him.

Young Pyromancer is just in the list because of my own personal thoughts on him, and I don't really think he's that fantastic in a "creature etb" deck like purphoros . He does make tokens, so all your spells essentially have +2 damage to opponents, but again, there are only 23 spells in the deck. If it was something more like Zada, Hedron Grinder , where he relies on going wide with creatures, that's a little different.

Devastating Summons is also kind of dodgy in this deck. You sacrifice some lands for 2 creatures. I'd much rather sacrifice X lands for X creatures .

Now, don't get me wrong. This deck is a burn deck, but normal burn spells, such as Sizzle are not very good. This is commander, where each player gets 40 life. Burning with 3 damage from such effects will take ages, and there's only so many unique ones. You're best off replacing it with something that will further your gamestate, such as kiki-jiki , Panharmonicon or Impact Tremors .

Mass Mutiny is kind of fine. The problem with it is that it's only one creature, when you could take every creature , without targetting. This means that your opponent can't protect their creatures from getting stolen without using countermagic. Also, stated above, Insurrection + Mogg Infestation is an almost guaranteed game-winning play, which can't really be done with just 3 more creatures.

Scour from Existence is unconditional removal that gets past Avacyn , but is really quite expensive - 7 mana to exile a creature. If it really requires this to get rid of it, you've messed something up...

Conjurer's Closet is kind of alright, but it's really not that fantastic. You would be best taking it out for a tutor, such as Goblin Matron , Imperial Recruiter or Gamble . These cards will help you find more stuff, like kiki-jiki , SG Commander or others that will be just as, if not more, effective than whoever is already in play.

Endless Atlas is fine, if you want to pay so much mana just to draw a couple of cards. I use Mind's Eye , which may be more expensive to cast, but it's cheaper to draw, and also can draw more than just 1 card each turn.

Madblind Mountain is interesting, but not necessary. It does let you shuffle your library (for whatever reason), but apart from that, it's just a slowland. You can tutor it up with a panorama, but what does it actually contribute to?

sdidonato: I have considered it before, and at one point ran Gauntlet of Power and Caged Sun. What I found was that I really couldn't take advantage of all the extra mana, and was only getting the slight anthem effect out of it, so 4 CMC was a rough cost just for that.

Since I doubled up on the Blood Moon effect I am also a little iffy about running Might specifically and doubling the mana that the opponent's Mooned mountains make.If I ran more mana sinks (Goblin Warrens/Rolling Earthquake/Indomitable Creativity for instance) and had more mana creators (Mana Echoes), it would definitely justify running something like Might.

Who knows, I've been making regular changes to this deck recently to add some freshness to it now and then, so maybe mana doublers and mana sinks are on the horizon!

Legion Loyalist and Goblin War Drums. I see a few haste machines, why not first strike, trample, and menace?

Also, I think you should really consider Goblin Warrens. With Purphoros, God of the Forge and Impact Tremors that alone is 9 damage every time you use it. Some of your other cards would also increase this damage.