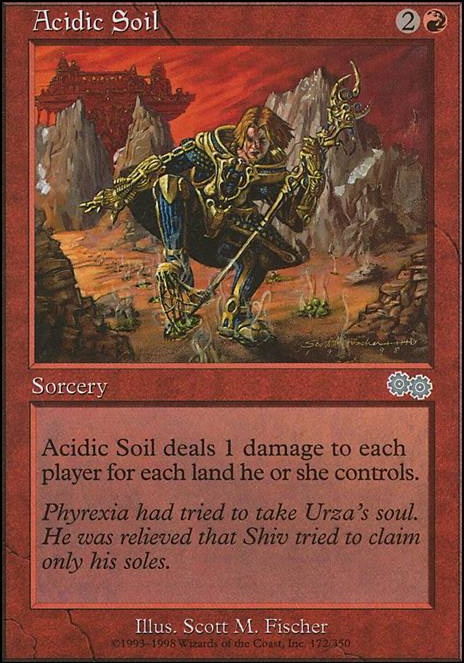 Acidic Soil deals damage to each player equal to the number of lands he or she controls.

Burn with me
by Malgorus

The Queen of Deception [7]
by lullelukas

alexjustdoit - makes sense. Perhaps I'm underrating Vampire Nighthawk. I suppose the lifegain effects help a lot when you are running things like Acidic Soil & Price of Progress (which I am currently not) which also hurt you.

Have you tried Kunoros, Hound of Athreos? My meta probably isn't resilient enough to fight against strong hate or stax, but I like that this guy does other things and being a creature is easier to remove (as opposed to something like Rest in Peace which could just lock someone out and does nothing against decks that don't utilize the yard).

Abzkaban - interestingly I just had a commission done for a Cersei alter of Queen Marchessa with Gregor and Qyburn assassin tokens, so I'm taking a similar GoT theme with my list. I'll post me list with the alters on here shortly.

How great is the Solemnity/Dark Depths package? I'd like to try it out but will need to cut some things like Assemble the Legion, Selfless Squire & Crescendo of War.

Thoughts on Assault Suit in a combat oriented build?