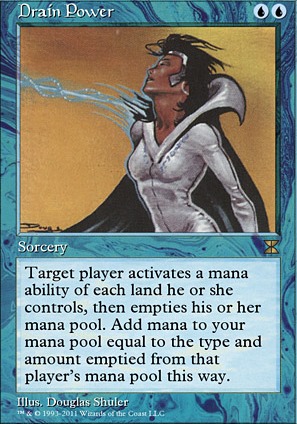 Target player activates a mana ability of each land he or she controls. Then put all mana from that player's mana pool into yours. 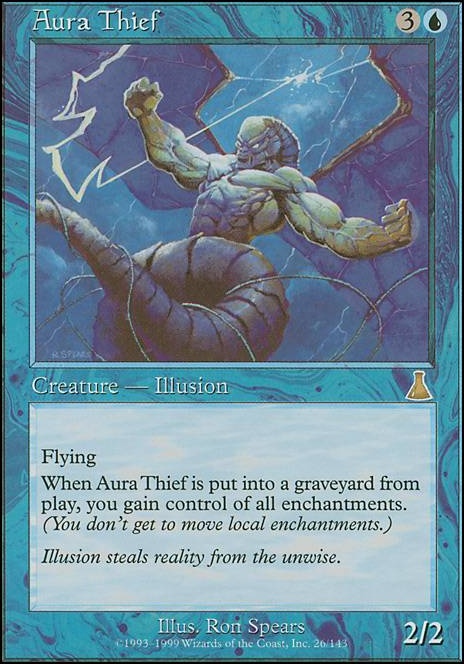 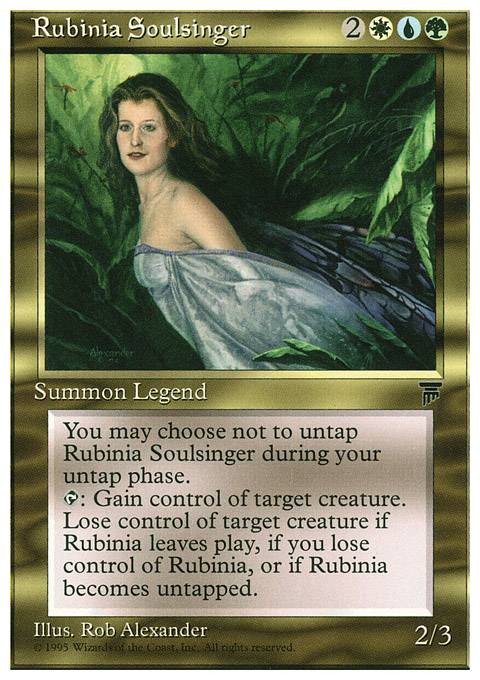 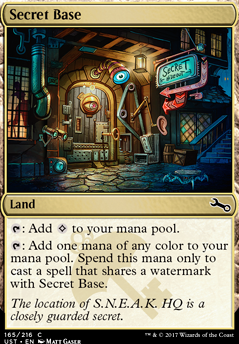 Oh, duh. I found an older edition of Drain Power when I Googled it, and didn't really check any deeper.

Hope you're doing well! The changes seem to be doing good so far, with a few notes:

What do you mean by expensive in regards to Drain Power ? Isn't it only $1?

Drain Power is both too expensive and too competitive for me. I hope you're enjoying the changes you've made Wicker.

...Although you could run Price of Glory with Drain Power or Fade Away although I'm not sure if you'd want to do that in multiplayer.

lothshteth on The Dark One

I agree that Teferi, Mage of Zhalfir is a more eloquent design. This is probably why WOTC hasn't touched upon Drain Power since Pygmy Hippo .

If I go with the Damping Sphere ability, would you suggest any changes to cost or anything else?

lothshteth on The Dark One

So, if they are unable to even tap lands for mana during untap, then the first time they would be able to is upkeep. At which point, this ability could be used whether a "tap" ability or upkeep trigger. They would then only be able to use mana on instants or activated abilities. Of course, to get maximum effect, I would have to put, that mana added this way doesn't empty as phases and steps end.

I wouldn't want to add the "can't activate abilities" because then it would border on oppressive. I'm not exactly trying to make anything groundbreaking.

This deck is focused on the mana pool. Increasing my mana supply, while denying my opponents. Stuff like Drain Power & Mana Drain are the kind of things that this deck wants to be doing.

Caerwyn on The Dark One

I do not see the timing abilities as that big of a problem. In a way, this ability serves to protect your creatures from removal. Your opponent is given two choices--cast their instant-speed removal while this ability is on the stack, thus no longer having that removal for any threats you play during your turn; or holding their removal spell for the potential threat you will be playing, and then casting the removal during their turn.

That's a very difficult decision, and can lead to all sorts of mind games with your opponent. Rather than see their ability to activate mana abilities as a downside, I see it as one of the more fun aspects of the card.

All that said, I think this ability should not be used on other grounds. In the focus on whether Drain Power is a good card or not, a more subtle, but much larger, issue has been missed. This ability is incredibly dependent on turn order.

Let's say the Blue/White control player goes right before you. This creature's ability will lock them out of their mana not just on your turn, but on the turns of every other player. You have now rendered their entire deck useless for the remainder of the game.

Conversely, let's say you're the player who goes right before the Blue/White control player. Now you have created a situation where they can counter everyone else, but you are immune from their machinations.

That is a complete nightmare and leads to incredibly unfun gameplay.