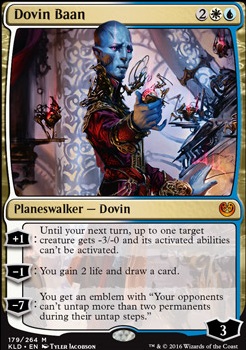 +1: Until your next turn, up to one target creature gets -3/-0 and it's activated abilities can't be activated.

-7: You get an emblem with "Your opponents can't untap more than two permanents on their untap step."

Dovin Baan occurrence in decks from the last year

Liliana Vess is my big, big second ability planeswalker. I genuinely can't remember her Ultimate and tend to switch her discard ability with Liliana of the Veil .

I feel my favorite archtype: Stax doesn't have an adequate planewalker. My current decks feature Teferi, Hero of Dominaria , Teferi, Time Raveler , and Dovin Baan in one, and all the Elspeths in the other, as it is a more sacrifice and token oriented build (proliferating Smokestack is super fun, especially if you have loads of tokens).

Venser, Lord of the Ephemeral

+1: Exile target permanent you neither own nor control. Return it to the battlefield under its owner's control.

-1: Until you next turn, whenever a player taps a permanent for mana, that permanent gains phasing.

-10: You get an emblem with "Whenever a permanent enters the battlefield under an opponent's control, that player exiles a permanent they control."

This would be absolutely ideal for a stax build.

another favorite of mine, which features in my stax builds, is Mass Land Destruction. I want either or Commander (Creature or Planeswalker) for MLD.

Thank you for support my petition for this brew! Now I can share some ideas I had for my Atraxa deck and maybe can help you.

Contagion Engine could be a nice answer against mini hordes and also indestructible creature using the double proliferate ability killing them slowly and pumping up your permanents.

For card draw, Rhystic Study , Phyrexian Arena and Toothy, Imaginary Friend are good refilling your hand during the game.

Some mana rocks I run in my deck are Gilded Lotus , Coalition Relic and Astral Cornucopia .

And for the SuperFriends team I will suggest Liliana, Dreadhorde General , Ajani Unyielding and Dovin Baan . First, Liliana allows us to create chump blockers and draw cards when they die or another creature of our own. This also is good using her -4 while we have on the board Academy Rector and Arena Rector and needless to say about her -9; Just brutal. Then Ajani can help us find more Suprefriends with his +2, exile some annoying creatures with his -3 and pumping up our board with his -9. And Finally, Dovin can silence creatures, draw cards for us and his ulti is just obscene as hell.

I hope these suggestions help a little!