-1: Until your next turn, prevent all damage that would be dealt to and dealt by target permanent an opponent controls. 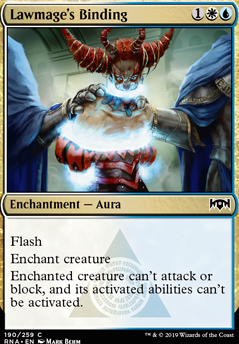 The Azorius Senate
by Poly_raptor No problem Zuzur, your deck gave me a challenge so it's the least i could do:)

I thought my deck was finished, but i'm always finding more possible additions.

As for the 2x Dovin, Hand of Control slots, i do think there are cards better suited, when playing against your deck that's one of the cards that never worries me or really disrupts my play style - although i can see it's uses if you were up against a more spell based deck

Being a full custom decklist, it changes everytime.

Atm, I am still thinking about the x2 Dovin, Hand of Control slots. I have several ideas behind it, I will test it more and come up with an answer on these slots.

Good improvements. But Cloudkin Seer is strictly better then Tome Raider . If you want to try another walker in here Vraska, Swarm's Eminence or Kasmina, Enigmatic Mentor or Dovin, Hand of Control will help you bide your time. Keeper of Fables could get you more card draw. Silverback Shaman is ultra cheap less then 20 cents. Gargos, Vicious Watcher while you have no synergy and comes in at around 50 cents is and 8/7 for 6 mana.

I run Aminatou as my main commander, and i like the idea.

If youre going to run cards like Aura of Silence you might wanna run the rest of the stuff like that, too. Kasmina, Enigmatic Mentor , Dovin, Hand of Control , God-Pharaoh's Statue . The planeswalkers can be flickered for extra value as well.

And i feel Reality Acid is required removal for Aminatou. 3cmc, and ruling says you still control it even when their things are enchanted. So go ahead and flicker the crap out of it and destroy everything they know and love.

Finally, just adding Spark Double and Altar of the Brood is a sneaky wincon, because SD and Aminatou blink each other forever and they mill out.

Theres a ton of different ways to go infinite with various combinations of Felidar Guardian , Panharmonicon , Oath of Teferi , Spark Double ... Shameless plug, you can check out my deck for a listing of alot of them.

Id also recommend the all-powerful Peregrine Drake or the Palinchron if you have money.

I love her as a commander so much and i love seeing other peoples takes and ideas.

When you want to mix control and an aggro strategy your best bet is what we call a Tempo deck. You want to slow down your opponent a littlen while speeding yourself up. Otherwise you find yourself slowing yourself down, to also slow them down Law-Rune Enforcer is a good example of you slowing yourself down as much as it slows the opponent, whereas Dovin, Hand of Control supports your tempo advantage.

I like the white splash for Giver of Runes and being in WU would allow you cool stuff like Teferi, Time Raveler (also a tremendous tempo play), it is missing too much of it's aggro side.

It wants Scale Up (note: the creature keeps infect, just gets better stats), it wants Glistener Elf , it wants to protect it's threats with Blossoming Defense . It wants Green. It wants Might of Old Krosa , it wants Mutagenic Growth (even if you do not add green.

Take out the stuff that does not actually help your control or your aggro and are just cute tricks: Grateful Apparition , Law-Rune Enforcer , Priests of Norn , Viral Drake and focus on making cheap threats, making them big fast, getting them through and protecting them.