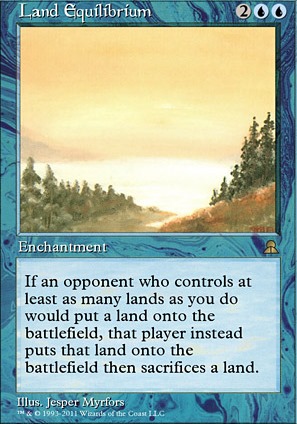 If an opponent who controls at least as many lands as you do would put a land into play, that player instead puts that land into play then sacrifices a land.

Rzepkanut on What are the most abusive â¦

Syphon Mind and Midnight Clock are far better in multiplayer but not particularly "abusive". Ward of Bones and Land Equilibrium can be crazy harsh in a big game vs a small one and they tend to feel a bit more "abusive". Edric, Spymaster of Trest also really shoots up in power level with multiple opponents. Unwinding Clock is basically a colorless Seedborn Muse, its super busted. Disrupt Decorum is a hell of a party that doesn't even work in 1v1. A known Constant Mists can do wonders in hand, as nobody will want to waste an attack on you. Arachnogenesis and Comeuppance are similar, if they are suspected responses to attacks you may start being left alone in the game until someone has a counterspell for you. Dragon Broodmother, and a few other cards trigger token making on each player's turn, maybe not super abusive but still much better in multi than in a 1v1 game. Mind's Eye can be quite strong as well, especially with Smothering Tithe!!

At the risk of being ignored like before and the person above me, Snapcaster Mage would mage a great addition. I know you don't want to add too many creatures but Spellseeker is a good tutor as well.

Moreover, you should consider upgrading your mana base...

Castle Vantress - Helpful to ensure you get what you need.

Strip Mine - To stop boseju, cavern or other utility lands such as urborg, coffers, field of the dead, etc...

Treachery - Control magic but for free. Lots of decks crumble without their commander, especially if they are mono red or black that have difficulty removing enchantments

Invoke Prejudice - With such few creatures, this can slow them down pretty hard

As Foretold - Note you can cast cards on their turns for free. Very powerful

I understand your'e a combo deck and some of these might not be exactly what you're looking for, but should be considered nevertheless

Invoke Prejudice is certainly a card we cannot afford to run. Whilst Yuriko is very blue in nature and is mainly colored mana (barely any colorless sources), it is still a whopping . This is way too demanding and would essentially come out turn 6 or so. The effect itself is also subpar, as yuriko is almost always on the field, meaning a creature has to be strictly not or . Land Equilibrium these days has just become too slow. In a turn 3 format like this, we really need to be answering game winning combos or dishing them out ourselves, and land equilibrium unfortunately provides neither in here. Nether Void is definitely playable in Yuriko, as both Yuriko and all other Ninjutsu avoid having the pay the . That being said though, I think the fact it costs 4 mana to bring out is highly problematic, as it doesn't do enough for it's CMC. This particular list, 5 mana is "end the game", so 4 mana should be borderline doing that, ala Sakashima the Impostor or Insidious Dreams. The Abyss we unfortunately dont break parity on enough to break, but even in cEDH in general it is barely playable because of it's hefty casting cost.

I'm really loving this list, and I'm adapting my existing Yuriko to be similar.

What's your opinion on other stax effects that Yuriko can effectively bypass? Depending on meta I see some room for customization here. To me it looks like Invoke Prejudice, Land Equilibrium, Nether Void, The Abyss, Oppression, and others could be useful based on meta calls, and Yuriko should remain largely unaffected.

I'll admit this is not exactly a "budget friendly" build, but it wasn't always that way. There are definite easy swaps and removing 3-4 cards should save thousands of $.

The Tabernacle at Pendrell Vale - Its honestly worth the money, but replaceable. While it being a land is why its an amazing play, there is Pendrell Mists to replace the effect. Yes Tabernacle doesn't usually tap for mana but I often times have Urborg out to make it produce black, so be prepared to up the land count as well.

Invoke Prejudice - It is really good and often times people have never played against it so it catching people off guard makes a big shift in play. But the (the only card in the game with that mana cost BTW) is really rough to cast without a really solid mana base (Proper fecthes/duals and moxen are $$$$) BUT... there is a great alternative with Ward of Bones . The colorless helps make up for the fact that it costs one more mana but it also means they can't play more lands than you making up for another expensive card, Land Equilibrium .

All three cards are Legends Rares, of which there are only about 17k making them more rare than any one of the power nine by comparison so another justification for the high price-tag. However, Legends was reprinted later in Italian and with a higher print run so sometimes you can find HP Italian at 1/3 the price if that helps. But also, with solid Enchantment/artifact creature hate, Copy Enchantment and Copy Artifact means for $10 you can have TWO of something! Works great on Greater Auramancy as well.

Another part of the big budget can be fixed by running cheaper versions. This also has Alpha/Beta Sol ring, Demonic Tutor, and Counterspell; Masterpiece Urborg, Stifle, and Scroll Rack etc. Cheaper versions should easily save a lot. Also, Timetwister can be replaced obviously. The only place I'd say NOT to skimp is the mana base. it runs a very low land count but also has all the best mana rocks. So be prepared to add more lands or alternative ramp.

As far as Counter spells? Yeah, too many are bad IMO. Especially on Isochron Scepter. Your counter spells should be just to make sure you win or someone else doesn't ruin you. Saving a GOOD counter spell for someones Cyclonic Rift, or having one to make sure your win con resolves is more important.. and honestly, more fun to play both with and against. Instead of more "No!" in the deck that you'll just be holding in hand... Play more effects that work WITH your deck. Instead of playing Humility and holding onto a Counterspell , play another card like Torpor Orb or Portcullis and make THEM have more to play around! Let them destroy it and then bring back with Replenish or Brought Back instead. Brought back is a nice way to bring back two lands after playing lotus vale or cracking two fetches, grabbing duals, then bringing back the fetches to play. THAT kind of flexibility makes your deck BETTER and still serves as a proper response.

Let me know if you put a decklist together, I'd love to see how you run it.