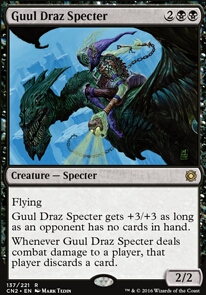 Guul Draz Specter gets +3/+3 as long as an opponent has no cards in hand.

Whenever Guul Draz Specter deals combat damage to a player, that player discards a card.

Hey, discard can be a solid strategy now that there are so many cards to support it being a win condition, but there are a few aspects of your deck that stand out to me as maybe needing work!

The biggest problem is bound to be Ashiok's Adept - he only makes your opponent discard a card if you target him with a spell, and you currently have zero ways to do that. As is, he's just a 1/3 for three mana... not too exciting. Probably it's better to just cut him out rather than try to remake the deck to support him!

Another odd inclusion is Bridge From Below, which only has an ability so long as it's in your graveyard. How do you plan to get it there? Target yourself with Liliana? Probably this isn't the right home for it, either!

For your creatures, there are a couple upgrades I can think of that wouldn't be very expensive. Hypnotic Specter has got to be the best specter in the game, and I'd strongly recommend him over Abyssal Specter. Guul Draz Specter is a good alternative, too. If you're running to run a cheap guaranteed-discard critter like Ravenous Rats, then Burglar Rat is a small upgrade!

Mind Rot is also a card with lots of solid alternatives. Stupor, Unburden, Heartless Pillage and Demogorgon's Clutches are all just flat-out better!

Overall you have a solid chassis here. My main advice is to get the deck down to 60 cards and cut out anything that doesn't support your main strategy!

ClockworkSwordfish on Are there any cards you â¦

Oh man, all the time with older cards. Cards from sets like Legends and The Dark have names, flavour text and art that make the latest sets look like Super Deck! by comparison, but often they... aren't quite there in terms of power level or functionality, ha ha. Most of the vanilla legends from Legends are the real mind-bogglers. You're showing off not one but TWO dramatic new mechanics - gold cards and legendary creatures - and you do so via... a vanilla 5/5 for seven? He really has no special abilities to his name?

Having said that, I think my pet card for underperforming is the beautiful, horrible Entropic Specter. It has the coolest art of any specter, among the coolest of any cards ever. But it is by its very nature self-defeating. A creature that is the size of the number of cards in your opponent's hand - which, by the time you can play a five mana creature, might only be one or two - will make itself SHRINK every time it nails him if it's also causing discards. Why print a five-mana rare that wants to do two different things at once? If it's performing in one arena, it's failing in the other, and the two really are mutually exclusive.

The easiest fix? Just make it like Nyxathid. It's a 7/7 that shrinks based on the number of cards your opponent's holding - but like any specter, it flies and makes him discard with every hit. You know, sort of like a reverse Sturmgeist. Or a more sensitive Guul Draz Specter. Simple! Elegant! Not confusing in terms of how to use it!

You seem to really like card draw, so i'm surprised you missed Indulgent Tormentor !

This deck is pretty budget, but if you want a great comander draw engine consider saving for Rhystic Study .

If you are aiming to do some damage with AoE B Enchantments, consider getting Painful Quandary .

If you want to go a bit more discard route, how about Quest for the Nihil Stone , Wheel of Torture , Shrieking Affliction . (you'd need cards like Guul Draz Specter , Stronghold Rats , Urgoros, the Empty One .)

I feel like card draw is less valuable then you might think. At some point i wonder what it is you want to draw with your card draw, and why having card draw would be better than having said card in your deck. I wouldn't expect any card draw in a deck with your commander. If you'd have to make this deck without any card draw, what would it look like? What problem then, are you solving by adding card draw?

GL with your deck and playing mtg!

DISCARD ALL THE THINGS

I love that you can completely shut your opponent down right away with all these discard cards. Tormented Soul doesn't seem very good here though. I also wouldn't run Dark Deal since you don't want to lose too much of your own cards. It might be better to go for some more low mana discard cards like Divest and Lay Bare the Heart. You should definitely run Guul Draz Specter, that would be a great alternate wincondition in this deck. Shrieking Affliction could be of great help as well.

Some other discard cards that could work (but might be too expensive or not useful because you can empty your opponents hand pretty quickly already) are Scepter of Fugue and Mind Shatter.

Maybe you could try Guul Draz Specter instead of Shimian Specter.

you've got a good base. I would recommend adding a few more creatures such as Dreamstealer, Guul Draz Specter, Hypnotic Specter, and Liliana's Reaver. Just so you have a bit more defense against other attacking creatures. Also a few good enchantments that you might want: Larceny, and Raiders' Wake