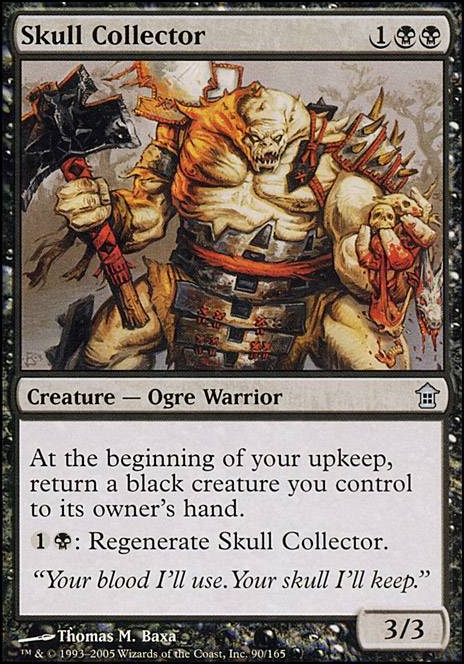 At the beginning of your upkeep, return a black creature you control to its owner's hand.

Get "goad," bro!
by BatsAndZou

This Demon Brings the Slap Party!
by TAlder3106

Skull Collector is awesome, I've never heard of that.

May I suggest The Cauldron of Eternity ? I'm currently testing it in my Chainer, Nightmare Adept list, and I feel like it could be useful here. Also, how about Dire Fleet Ravager ?

Thanks for the suggestions Funkydiscogod!Gatekeeper of Malakir feels great in this deck, I will surely try it. The same is true for Big Game HunterI played a lot a version of this deck using Skull Collector during the Mirroding - Kamigawa period, probably it works better than Cloudstone Curio in this deck; I'll have to play some games to compare the two.

I play a Gonti as well and he's super fun Sharing With Gonti.
I really like Skull Collector, if he's left alone you can get stupid value off of etb cards. Blade of Selves is solid, just having it on a Gray Merchant of Asphodel or Fleshbag Marauder is backbreaking. Sepulchral Primordial fits the theme of playing with your opponents cards (and if Panharmonicon is on board oh boy). Lastly Buried Ruin and Beacon of Unrest are helpful, my LGS will not let me keep anything on board.

After bouncing some ideas with some Magic players at my LGS after Friday Night Magic, it was suggested that I include a playset of Skull Collector to combo with Chittering Rats for potential endless draw denial. The Collector's downside will allow me to repeatedly recur and recast the Chittering Rats to ensure my opponent will never be able to draw a new card.

It was also suggested that I include more 1-drop discard spells, and cut down on my curve. I have also never found myself pulling the Befouls from the sideboard, because they are simply too expensive to cast, and the only matchup where they're actually good is against Tron.

The singleton Pack Rat has been swapped into the main for an Ogre Slumlord. It's a nice card to draw into if you're grinding out the game, or if you can play it T2 and start chucking out dead draws.

Two copies of Despise have been added for a Ravenous Rats and a Swamp. More opening hand disruption was needed, and Duress won't always do the job, especially against aggro strategies. An additional Despise was added to the sideboard in place of the Pack Rat.

The two Mutilates have been exchanged with the two Victim of Nights from the sideboard. Since my new strategy will revolve more around the Skull Collector/Chittering Rats combo, boardwipe needs to be sideboarded for when I need to use it, not in the main.

The playset of Skull Collector is top of my to-buy list, since it facilitates my new strategy to grind out the game. The two remaining Ogre Slumlords and the Okiba-Gang Shinobi will be cut for these; Slumlords are too high-costing and are bad against matchups with efficient removal, and although the Rat Ninjas will be missed, their card disadvantage utility will be picked up by the interaction provided by the Collectors.

A Swamp and Beseech the Queen will be cut for two Funeral Charms. It was suggested as another 1-drop hand disruptor, but also for the instant-speed playability. I don't know if I would ever use the other two modes, but hey; utility is always welcome. The Beseech will probably be moved to the sideboard to replace a Befoul.

Lastly, two more Befoul will be cut from the sideboard for a couple Lashwrithe. It's a strong beater that is less vulnerable to creature removal since it lasts as an equipment.

The last Befoul and the Virulent Plague will probably be cut for Illness in the Ranks. Cheaper to cast, and I've been told most tokens that appear in Modern will be no bigger than 1/1s anyway.

If you have any comments or criticisms for these exchanges, let me know! This deck is incredibly fun to pilot, and absolutely ruthless to play.

Get Skull Collector in there dude!

Dude! Very nice and straight to the throat... Point...Mark of the Oni! That is all :pAlso Rune-Scarred Demon is fantastic! If you slap in a few Skull Collectors, you'll be able to abuse a lot of your guys with "enter the battlefield" effects. And Blood Speaker is brilliant for tutoring again and again. A single Crypt Ghast can really speed up your castings, as can Heartless Summoning don't let my wife see that I'm giving you these tips. I'm basically ripping off one of her decks :p not really... I used to have a monoB demon deck, that I turned rakdos, and now she's the monoB demoness queen of the household - and she evil!