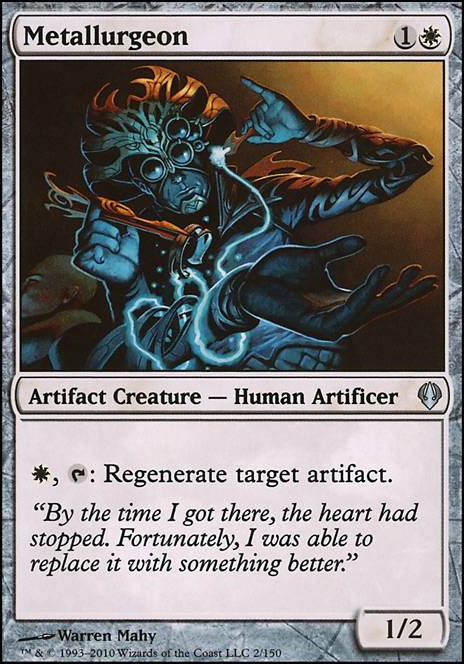 A whole greater than its parts
by RadiantSnep 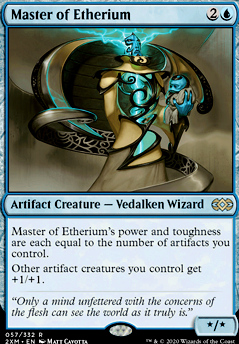 Also very short on sorceries and instants, but most creatures have an effect. Baleful Strix and Metallurgeon combo could be used to slow down things until Master Transmuter and sphinxes come into play.

Hangarback Walker seems to be a good card to put along Steel Overseer to make this deck a little faster. I also have a few copies of Tempered Steel to add a little bulk, maybe Metallurgeon to protect some of my creatures in a pinch. Those cards seem to be good if adding black, but I think i'll try some of these other moves before going that route. Thanks for the tips.

Your deck looks decent for a budget deck, but remember that it is extremely easy to remove artifacts and creatures in EDH. You need some more ramp and coverage for your creatures.

Here are my brief recommendations.

Remove: Quest for the Holy Relic- You don't have enough creatures to make this useful or consistent

If you can afford it: Darksteel Forge, Door of Destinies

I recommend taking a look at Srama Lama Ding Dong - Sram $40 Budget Voltron and These Are a Few of Sram's Favorite Things (CheapDH as while they are different than your and run different commanders, you'll probably find quite a few ideas to upgrade your deck.

Mechanized Production might not be a bad choice. You can copy your mana rocks to increase ramp or equipment to Voltron up, and possibly win if no one comes up with an answer in seven turns (unlikely).

You seem to have a lot of field buffs in this deck. Gideon, Ally of Zendikar fits into your Human tribal, and he can create an irremovable emblem that buffs your whole field.

Here are some interesting human artifact creatures that you might find room for: Metallurgeon, Sen Triplets, and Silas Renn, Seeker Adept.

I Equip, You Lose

Okay so I have made quite a few changes. I felt like it kinda of sidetracked away from the main objective a little with the amount of card choices :P.

I have added in the Faithless Looting I think that will truly work wonders in this deck. I have removed the cards I have deemed to be unnecessary even if they are good cards in their own right. As you've said the main objective is to be able to pull off a combo in the early stages of the game.

I feel like Metallurgeon is very relevant, it can protect itself unless cards say 'cannot be regenerated' and it protects Deathrender and Quicksilver Amulet however the beauty of Welding Jar is that it's a instant, free negate. Makes me wonder if the opponent would even play enough removal to worry about running out of jars and needing the Metallurgeon

I have added in Insolent Neonate also, even if the sacrifice for the combo doesn't come off it's still card draw to stop it being a dead card.

lithium142 - Let me know your thoughts?

I Equip, You Lose

So i've playtested this a lot. (i really love this as a concept. It's like instant reanimator, but more consistent damage, rather than tap trigger trigger you die.) I have a few things i think you should put some thought into.

first, this deck can be slow. That's ok, but you have no way of stalling; not even any removal.

next, I found that Brass Squire, Metallurgeon, and Steelshaper's Gift could end up being dead draws very frequently. I think you can lose Steelshaper's Gift entirely since 8 cards of your deck constitute that win condition anyway. Brass Squire is trickier since he can accelerate your win condition, he's not something i'd want you to cut. Instead, i think you should run 2 or 3 of him rather than 4. Metallurgeon is in a weird spot too. Both he and Welding Jar do the same thing in your deck. I think going from 6 of that effect to 4 would be excellent; whether thats 4 jars or 4 urgeons, or 2 of each. Doing this will give you space for the much needed removal in your deck.

As for removal/a way to stall; you will potentially be opening 6 card slots for your deck. I dont know how casual friendly you want to keep this. if you wanna go hardcore, Path to Exile (though id wait for mm17 to release before you spend money on them). alternatively, you're also in the right colors for Lightning Bolt. If you want to go really budget, there is Oblivion Ring, Condemn, Sunlance (should really play bolt over that one), Journey to Nowhere, or a personal favorite of mine, Oust.

If you would rather go the stall route, the first card that comes to mind is Ghostly Prison. This is a hose, however, so im not sure how keen your friends would be on it. alternatively, Wall of Omens is amazing, and would actually benefit your deck as a cantrip to draw into your combo pieces more quickly. if you'd like a funnier budget option (though i cant believe this card is actually as cheap as it is), Boros Reckoner was once a $20 staple in boros aggro decks. he's lost his pricetag but is still just as awesome.

On a different note, if you'd like to troll your friends, you could occasionally put in Mana Tithe and Lapse of Certainty. no one needs to know =P

anyway, let me know your thoughts on this proposal

Ok cool. That actually really helps. I'm thinking of having both Ultimate Price and Go for the Throat (mostly cause most of my friends decks rely on specific creatures like a hydra deck). Then, adding a few lower cost creatures like Baleful Strix and Metallurgeon because it seemed there wasn't enough to balance out the Sphinx cards high cost. Do you usually have a problem getting the high cost guys out? The deck is gonna be closer to 70 but I like having a few more cards. It doesn't seem like it will hurt very much.