Whenever a creature enters the battlefield, you lose 1 life and add (Black) to your mana pool.

Carnival of Souls occurrence in decks from the last year 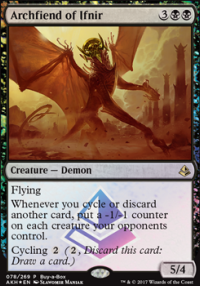 Kaya & Jeska Plan To Take Over The World
by diamond_diesel 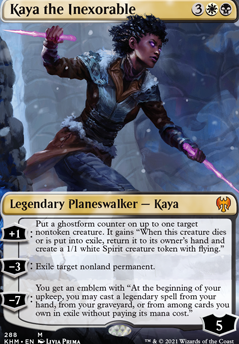 Here are some others that might be worth considering: Storm the Citadel , Attrition , Shamanic Revelation , Moldervine Reclamation , Wilderness Reclamation , Awakening , Parallel Evolution , Carnival of Souls , Revel in Riches

I added Carnival of Souls to sideboard, cuz that combo is awesome! And thanks for the recommendations, they really helped shape the deck together. Happy Magicking(if that's how you spell it)!king-saproling

Here are some less-vital swaps I'd make as well:

Also just noticed you already have Fungal Plots, my bad. Maybe Carnival of Souls ? Risky card but it has infinite combo potential (e.g. Carnival + Utopia Mycon + Illusionists Bracers + Slimefoot = you win). Even outside of the coumbo it is decent since it increases sap production and Slime's lifegain effect can mitigate Carnival's downside somewhat.

Demons Spat from the Abyss

You might like these: Rally the Ancestors, Return to the Ranks, Lightning Coils, Tormod, the Desecrator, Desecrated Tomb, Carnival of Souls, Pitiless Plunderer

MagicMarc on How Does This Aristocrats Deck â¦

The deck also has multiple ways to win via the storm mechanic by either draining you to death or removing your library from the game.

Basically it has many ways to achieve a recursion or storm engine following a few simple steps:

Step 1: Sacrifice or Cast a creature. Then profiting from sac or cast triggers.
Step 2: Return it to play with a trigger or ability or cast it again when returned to hand. Raising storm count or draining more life or other triggers or abilities.
Step 3: Repeating this process and winning or raising Storm count to win using one of the multiple storm cards.

Sanglier: I somehow got Thornbite Staff from someone's entire collection before it jumped to like 6-7 dollars :D
To mess with my others, I like Life's Finale; Sadistic Sacrament and Bitter Ordeal to cripple their cards or entire libraries with some infinite die triggers for Bitter Ordeal (I use Desecrated Tomb + Phyrexian Altar + Tortured Existence for that), but thats a bit more evil than just a discard spell... :D More cards I know about like that are Nightmare Incursion and Praetor's Grasp, all those cards could work really well together in some library-hate themed deck I guess.

Anyway, Thornbite Staff could be really sweet here with Gisa, even with only a 2/2 zombie token on board, which would basically be: ": sacrifice a 2/2 token to make two 2/2 tokens." whiiiiiiich, just looking at my collection again, could go infinite with Carnival of Souls and something that gives you 1 or more life upon a creature etb, like Ayara, First of Locthwain. Just not every playgroup is OK with infinite combos.. just some ideas here :D