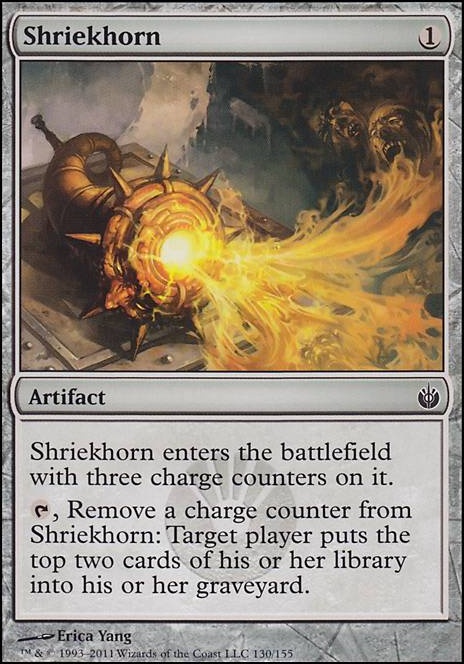 Wondering if I should aim for Grist ult. I want Ashes to happen for huge self mill but not complete. Maybe Boneyard Wurm over Splinterfright or Old Stickfingers for a few two drop 'goyfs.

Will (+) Emry. I'm going to try Shriekhorn for another target for Chancellor G.

Anyway, I like 8 one drops that can mill. Shriekhorn is ok but Hedron Crab is better. Blue gives you Wonder, Laboratory Maniac, some others I can't think of.

Also, the land Svogthos, the Restless Tomb (main) and Worm Harvest (side) are excellent vs control.

lagotripha on Help with my landfall deck

The two main things I'd look at for that list before running either of those is upping fetch numbers - if you're stuck on majority basics for budget reasons, Terramorphic Expanse and Evolving Wilds still get you triggers.

Fetches trigger crabs twice, and that is what makes crabs good. Same with other landfall effects.

Second, I'd be less worried about the life loss from fetches if you are just fetching basics or a triome. When you fetch a shockland you are basically lightning bolting yourself, which can need lifegain, but is usually offset by more reliable sideboard lifegain or mainboard control. Card draw from courser/tatyova is the reason to run them and they are great at that, but effects to keep your gameplan running are where to focus.

If you are looking at buried ruin, you need to run artifact/mill synergies beyond just crucible. Shriekhorn+Grinding Station can work, especially with some of the infinite combos that grinding station offers, but its something that needs to be built around. You are in the right colours for Shardless Agent if you're prepared to lean into speed + value rather than counterspells.

Probably the biggest utility lands you could run would be Bojuka Bog, but without primetime shenanigans it can be hard to hit the things you need with it - Ashiok, Dream Render type exile graveyard effects matter because it takes one 'shuffle your graveyard into library' eldrazi to shut down the mill plan otherwise. Tormod's Crypt, Nihil Spellbomb or Lantern of the Lost are cheap and helps solve the problem.

Best of luck brewing crabs - its a fun archetype and has some neat brews - I'm partial to 12 crab with the snowlands and ambush vipers, but it all works.

jacobpmesser Thanks for all the great suggestions! Unearth, Shriekhorn, and Fiend Artisan are immediate adds. I'll do some play testing with the other cards and see if they fit in this deck. Would really prefer it stay Golgari, but I do know that there is a ton of great blue mill cards out there.

I did a bit more research into PD reanimator decks to find cheap cards, copies of Life / Death are $3 and it basically a 2 mana Reanimate .

Divest can let you see if re-animating is safe from removal/countermagic and you can target yourself to get fatties in the yard. Raven's Crime also works, and these are probably better than 2 cmc discard outlets.

Lastly, Nihil Spellbomb only hits enemy yards and draws you a card. Worth considering for the sideboard.