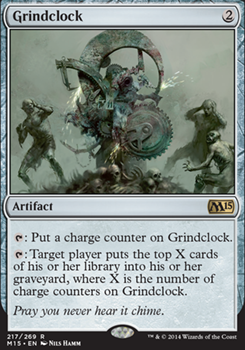 Tap: Target player puts the top X cards from his or her library into his or her graveyard, where X is the number of charge counters on Grindclock.

From the Top
by Fritzifer 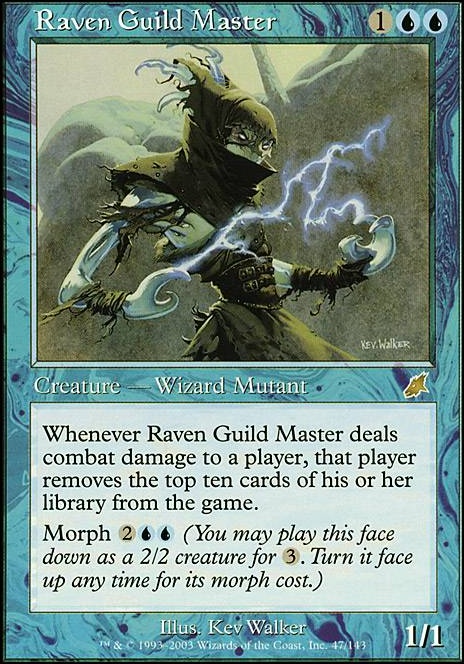 Looks great! Cards like Aura Shards and Return to Dust are edh allstars (I'm guessing one of the cards you skipped was Vampiric Tutor ? That one's pretty good too), and there's a bunch of gameplan-specific cards like Buried Alive and Dread Return that will work perfectly with Karador, Ghost Chieftain . Some other staples you might want to add are Eternal Witness and Sol Ring .

First thing you should probably change is playing 2x Makeshift Mannequin ... I know you're into playing banned cards and everything, but this format has RULES!

I'd also look for is more ways to get things into the graveyard. Right now, I see you've got:

The consistent options are great, since they allow you flexibility to find any answer, support synergies, and aren't going to whiff. The inconsistent options don't have the same upsides. The main reason you'd want to play them is to grind out value, so I think Perpetual Timepiece and Nyx Weaver could work (although I've been looking for an excuse to try Grindclock because I'd imagine it can take over a game if let's unintended for a few turns). Corpse Connoisseur is only useful if it's already in the graveyard, and Entomb might be a better option. Extractor Demon has the same issue where it's overcosted for a Thought Scour effect. Overall, since you only have three or so creatures that benefit from being cheated out from the graveyard, cards like Satyr Wayfinder might end up hitting things like Harrow , Buried Alive , etc. too often. This means you're probably going to have to play more self-mill type cards to justify cards like Ramunap Excavator .

Some options to get stuff into the yard: Grim Flayer Underrealm Lich Life from the Loam Golgari Grave-Troll (not my favorite since you don't draw a card, but if you have enough graveyard effects, it could work)

Sylvan Ranger seems strictly worse than both Sakura-Tribe Elder (puts the land into play and puts himself in the graveyard to reduce Karador cost) and Rampant Growth . There seem to be a couple cards like this that are meant to provide some enter-the-battlefield trigger and then get sacrificed for value, but I only see Viscera Seer , Cartel Aristocrat , and Bloodthrone Vampire . That means most of the time you play cards like Elvish Visionary , it'll just be a 1/1 on the battlefield. Viscera Seer is fantastic, but the other two outlets don't get you much value anyway, which makes cards like Yavimaya Elder more valuable. Looking into effects like Qasali Pridemage , Selfless Spirit , and maybe even Spore Frog is probably where you want to go, since they are situationally fantastic, can put themselves in the graveyard to cast karador, and are much stronger options to cast with Karador later in the game. They can subtly win you games sometimes. Maybe looking into things like Skullclamp could help if you want extra sac outlets, but you'd probably want ~10-15 cards that make 1/1's to justify it (not entirely sure though). It's wildly powerful though, especially if you can recur 1/1's with Karador.

Tutors: Eldritch Evolution Diabolic Intent (These two double as sac outlets if you want to go with that strategy)

Recursion: Unburial Rites Living Death Journey to Eternity  Flip (imagine how fun turn two Sakura-Tribe Elder into card could be? Also can be used to protect Sheoldred, Whispering One or Karador later in the game)

Finally, figuring out how you want to use your toolbox cards ahead of time help. Right now, there are a couple good lines for Buried Alive , such as Dread Return + Sheoldred, Whispering One , but what happens if you don't have three creatures available? Then you want Unburial Rites in your deck so you can pay 3W next turn.

Some final things to hammer out: 1. What's the plan for early game? Is it playing sac outlets then creatures with ETB triggers for extra value? It is playing utility creatures like Qasali Pridemage to develop a relevant board and solid recur value later in the game? Is it to ramp as quickly as possible into huge threats? Is it getting creatures into the graveyard ASAP with Grim Flayer or Entomb so you can Reanimate something huge on turn three? It's not bad to dip into each method, but you can have the best synergies if you heavily commit to one strategy, otherwise you might end up with great curve like Reanimate , Bloodthrone Vampire , and Ramunap Excavator , but no real value. 2. What's the win condition? I'd expect reanimating huge things out providing too much value with Karador, but even the best reanimation target Sheoldred, Whispering One isn't going to close out a game. The other targets like Soul of the Harvest and Harvester of Souls are great value, but bashing with a 6/6 can only go so far. If you're going more the reanimation route, perhaps dreaming bigger like It That Betrays could help. If you play these big boys, playing Ashnod's Altar could be fun, plus I think it's got a bunch of infinite combos. Sadly, a lot of the best options like Elesh Norn, Grand Cenobite are ~10-20 bucks. 3. My personal strategy would be to play a bunch of cheap value creatures like Selfless Spirit , ramp like Sol Ring and Sakura-Tribe Elder , the best graveyard stashers like Entomb and some self-mill cards (but only ones that can win me the game if left unattended, like Underrealm Lich ), 3-5 board wipes (you can always recur your threats) and the classic interaction package ( Swords to Plowshares , etc.), and probably 7-10 or so curve-topping creatures that can end games for you (from Grave Titan to It That Betrays ).

The deck looks great, it's gonna be scary in no time!

Some cards that go well with Atraxa, Vorel and the other counter effects are

Magistrate's Scepter + Vorel of the Hull Clade is a combo for infinite extra turns if your opponents let you get to it.

thanks AjanisLastDan! been playing around with different versions of this brew (mostly with sideboard match ups) and i really like the Mindcrank/Grindclock package for the extra mill. this deck is definitely dealing enough damage to use it effectively.

Also, if you're going wide with tokens, Second Harvest and Elvish Promenade would be fun inclusions. And you may want to swap Grindclock for Altar of Dementia in the event of a board wipe. Altar also makes it feel a little better to chump-block and sac your tokens.