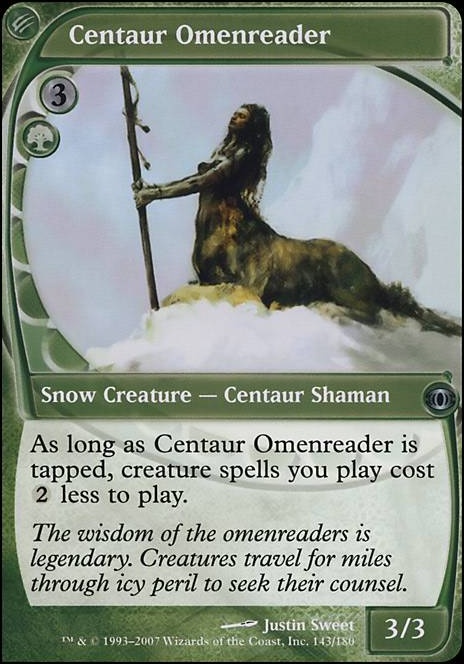 As long as Centaur Omenreader is tapped, creature spells you play cost (2) less to play.

Centaur Omenreader occurrence in decks from the last year

(Rapidash) and a Pokeball

Like Scyther, I chose to try to replicate the original pokemon card art for Rapidash. The background for the art on Centaur Omenreader is actually really similar to the background on the OG Rapidash art; they both have white clouds against a pale lavender sky. So that's a fun coincidence.

You may notice in the sideboard that Creature Guy is representing the 2/2 Morph token. I didn't do this as a joke or anything, it's just that the site doesn't let you select tokens for altered art. You can link to tokens, however, so it's odd that we can't attach alters to them.

Someone added Centaur Omenreader to the Pauper EDH ban list, for some reason this added it to the normal EDH banlist as well.

Not sure how to fix without simply removing the Pauper EDH ban-tag. I'm sure this made a few decks say that they were not commander legal.

Reducing lands is definitely the correct move for this deck. In the modern meta, the only decks running above 20 lands are Amulet Titan (for obvious reasons), and decks that feature land based land destruction in Ghost Quarter and Field of Ruin (Eldrazi Tron and Teferi Control, respectively).

Almost like I recommended a value draw engine to help fill hand, a mana rock to help accelerate and color fix, and a cost reducer as well as the deck already running a turn 1 dork ?

You don't even need the turn 1 dork to get to the turn 4 Owl, or you could miss the turn 2 rock. Worst case scenario pitch Owl to power your Force of Negation or tuck it with Serum Visions if you see it early on top. There's a reason I recommended small inclusion size, not a 4x. Yes, in a vacuum the Owl is expensive, but not with the other recommends I gave. Also consider that it serves a role as finisher for games that go longer where this deck can grind value with its big removal and counterspell suite (14 pieces of interaction!), and unlike Marit Lage's Slumber you don't have to take an upkeep for it to be a creature. The Slumber can be removed by enchantment removal, as well as permanently be lost to any 1 or 2 cmc bounce spell.

Scrying Sheets is free, reusable card advantage from a land. The only downside is that if you up fetchland density (which you should for deckthinning purposes) it has less effectiveness.

23 lands is really high. You can cut down to 20 rather easily, especially with the scry/draw you run. Frost Marsh should 100% go, ETB tapped. I would also cut Watery Grave Breeding Pool and Urborg, Tomb of Yawgmoth , your color intensity really isn't that high and they aren't snow permanents. If you up Coldsteel Heart to 4x, you should not have any problems with color requirements, especially with fetches.

Consider Rimefeather Owl as a possible 1x or 2x finisher. Its like the Treefolk except it flies and can generate further snow advantage. I'm also surprised you aren't running the Treefolk as a 4x.

I think Icehide Golem or Rimebound Dead both are better than Phyrexian Ironfoot . You aren't using ironfoot to combo with the untap + payload, so it just means it becomes a mana sink. Icehide is better if color intensity is too high, Rimebound better against aggro decks.