There's nothing like a good Mind Rot. Do you remember back when you first started playing Magic with your friends and you Mind Rot'ed away double Serra Angels? Do you remember how good that felt, and how unfair it felt to be on the other side? But then you got better at the game and put Mind Rot to the side, because it's actually pretty bad when drawn late.

With the reprint of Unburden and Duress, there may just be a critical mass of good discard spells in Standard that allow hardcore hand disruption to have its day in the sun. The only question is, are you prepared for everyone to hate you even more than they hate the Blue player?

That's a nice hand of cards you got there... Let's start out with the focused discard package: Duress, Unburden, and Implement of Malice. Duress is just great. One mana to get a peak at your opponent's hand and then toss something away is right where this deck wants to be. We have a lot of ways of killing creatures, so the noncreature rider barely matters to us. Unburden is fantastic on turn 3 to throw our opponent's plans out the window, amazing on turn 5 or 6 to get rid of the threats they were sandbagging, and even an ok draw when our opponent is empty-handed since we can just Cycle it away. Finally, Implement of Malice, which is a bit worse at forced discard than Unburden or Duress but replaces itself on activation and has great synergy with a couple of other cards in the deck.

You generally want to be pretty aggressive with your discard. These cards turn "off" later in the game once your opponent gets empty-handed, so prioritize hand disruption early.

... Be a shame if something happened to it Some threats are likely to slip past our hand disruption, so we're running a hefty removal package to deal with those. Fatal Push is an absolute necessity; it blows the budget wide open but there just isn't a substitute in mono-Black right now. On the upside, it's really easy for us to activate Revolt (Implement of Malice being one way) so this will be able to kill most baddies. Walk the Plank is our catch-all for most other creatures; I hate the Sorcery speed but it's what we've got right now. Finally, Never//Return is a way we can deal with Planeswalkers; Vraska's Contempt is probably better, but Never/Return should work fine (and save you a couple of bucks).

(Note: you could try running Harsh Scrutiny over Fatal Push if you wanted to save some bucks. Push is definitely better, but you'd cut the price of the deck in half this way. There's a case to be made for running Harsh Scrutiny in the 75 anyway to deal with Hazoret the Fervent and The Scarab God, so this isn't a totally crazy change to make.)

Ok, so you've stripped your opponent's hand of spells, killed their creatures, and destroyed their planeswalkers. Now what? Where's the heat?

We start our grinding small with Wall of Forgotten Pharaohs, which pulls triple duty. It a) blocks really well early, b) whittles away our opponent's life total, and c) helps ramp into our other creature, Herald of Anguish. Herald doesn't often come down before turn 5 or 6 (hence why we're only running 2 copies) but if you can stick one, it'll be devilishly difficult for your opponent to deal with as it often immediately makes them discard that removal spell they were sandbagging. Herald, incidentally, is why we've running so many artifacts over other options.

However, our strongest piece of attrition technology is Torment of Scarabs. Punisher effects are traditionally pretty bad but when you're already chipping away at your opponent's hand, board, and life total, those Torment triggers really add up. If we stick a Torment on turn 4 and our opponent can't get rid of it right away, it can easily deal 12 or more damage to them over the course of a game, in addition to strangling their resources.

We're really good at grinding our opponent out over the long game but we can also win all at once with Torment of Hailfire. It's another Punisher effect, I know, but we do such a good job of attacking our opponent on all fronts that Hailfire will either kill our opponent outright or leave them in such a sorry state that they have no hope of coming back. While we don't run true ramp, we're pretty good at hitting our land drops between the incidental card draw from Implement of Malice, Unburden cycling, and Renegade Map (more on that in a moment), so our Hailfires are usually quite scary.

It's not about the destination...

For lands, we have a pretty straightforward mono-Black desert package: some Ifnir Deadlands for picking off smaller creatures or neutering bigger ones, a few copies of Desert of the Glorified as a hedge against flood, Scavenger Grounds for a main-deck answer to graveyard value, and some good 'ol fashioned basic Swamps to round us out. Renegade Map brings our land count up to an effective 24-26, depending on how you count it, but it also helps us ramp into Herald of Anguish and trigger Revolt at instant speed -- all in all, a nice little workhorse of a card.

... It's about the friends you meet along the way

Crook of Condemnation is pretty necessary for this deck; we enable graveyard decks with all of our forced discard so being able to pick off Champion of Wits or God-Pharaoh's Gift targets is essential. Lost Legacy is another great option against combo, most importantly Approach of the Second Sun. The two copies of Hour of Glory are here as a budget answer to Gods (Vraska's Contempt would again be better if you have copies kicking around). Yahenni's Expertise is for go-wide decks, since they really put a dampener on our Punisher effects; you could run Bontu's Last Reckoning here if you want but I really want to be able to go sweeper into Hailfire, we don't usually have much trouble taking out bigger guys with spot removal, and both our main-deck creatures dodge Expertise.

That's all pretty straightforward, but our special sideboard tech is Gifted Aetherborn. This little dude is amazing against aggro, brick-walling most of their creatures and getting in for Lifelinking chip damage here and there, but it can also take out Bristling Hydras, Carnage Tyrants, or other big creatures that our opponent might topdeck later in the game. There's a case to be made for running Gifted Aetherborn in the main deck for the sheer value, but it's better after our opponent boards out their cheap removal.

Into the frying pan with you! 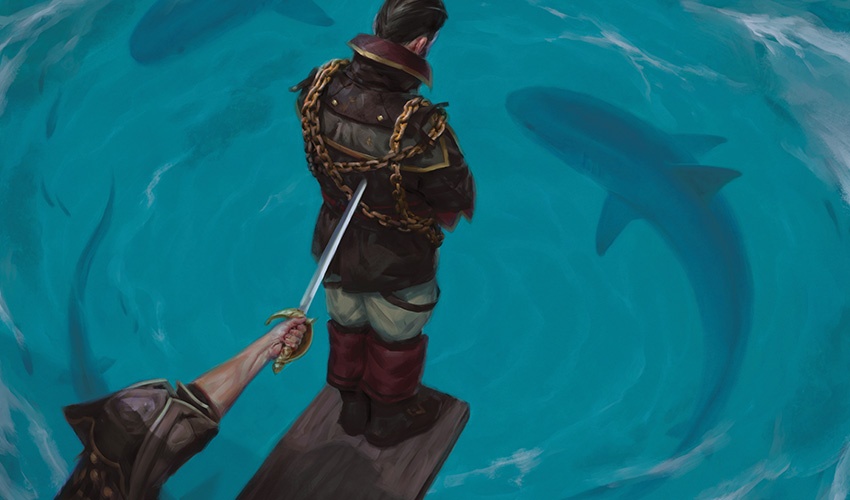 And that's it for now. Thanks for reading this far! I'd love to hear what you think, any suggestions you might have, etc. Should I be maindecking Gifted Aetherborn? Am I a fool for passing on Dreamstealer? Is Doomfall obviously better than Implement of Malice even taking synergy into account? Let me know!