Look at the top seven cards of your library. Put up to two planeswalker cards from among them onto the battlefield. Put the rest on the bottom of your deck in any order.

Deploy the Gatewatch occurrence in decks from the last year

Jeskai walkers and Control
by shoops123 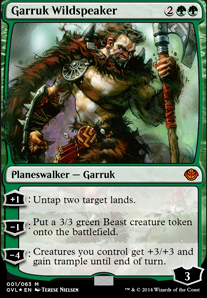 I have a similar deck idea for Pioneer, Fires of Invention is great to take tempo tricks to another level.

I suggest Anger of the Gods 2 main 2 side to beat MonoBlack and Deploy the Gatewatch in main for more fun!

If you still want planeswalker tutoring, I'd replace Deploy the Gatewatch with Ignite the Beacon . 2 less mana, you still net two planeswalkers, and instant speed. Ajani Unyielding has an incredibly useful ultimate.

I'm really not sure what Gods' Eye, Gate to the Reikai is doing in your deck tbh. I don't think Kaya's Ghostform does enough to be played over other cards, same with Oath of Kaya . I personally would cut Kaya, Orzhov Usurper too. I promise I don't hate Kaya as a character! but Kaya, Ghost Assassin is the better of the two imo

Also, TheBloopKing suggested Time of Need . It's a great card for fetching legendary creatures, but that's all it will get. So I wouldn't run it

Also, you run Arena Rector, how about Flash to kickstart that?

Firstly, I'm planning a Flicker Element on this. Aminatou, the Fateshifter is on there on purpose as it allows infinite Flickering w/ Felidar Guardian . But I've no idea if this is good as much as Venser, the Sojourner ; as he does this at the end of End Steps; far too late for effects being used here. At least I'm keeping Sundial of the Infinite for end step effects, & even something of more use than even Daretti, Ingenious Iconoclast this time... ( Saheeli, Sublime Artificer ) But I want more options for Flickering my Walkers; & I have stuff from WAR that are REALLY good; thus I'm unable to choose what to cut from them. I'm focusing on using Static Abilities to bypass even Humility as well as stuff no other walker before could ever use. But what to cut is really hard this time; do I cut Deploy the Gatewatch ? What's a better CMDR Walker: Najeela, the Blade-Blossom or Sliver Queen ? Should I even use Shocks in place of BFZ Duals? That, & keep Crucible of Worlds ? Aside from that, the Landbase is fine IMO. Wraths, & especially the overuse of Walkers is still a problem to get to 100 Cards. If you have any opinions for what I need to cut; or add, from the Flicker ide in the first place, let me know. One last thing, Can Venser's +2 still occur, even if he leaves play? I don't just want to be restricted to just Aminatou you know. Any other ideas for blinking for infinite combos are also recommended.

Thanks again in advance for the help! ^_^

Very well, I might as well change the ideas; though the Equipment stays. Even if buffing Saprolings is better than Value through Skullclamp â¦

Got a lot of things to note, though I'll get to them in due time...

One more thing, Now that the Gods of Amonkhet are Eternals as well, 2Q:

1: Is it possible Hazoret the Fervent will be one as well? She truly gave her respect for Samut, & her witnessing aforementioned God as an Eternal (Despite being the only one to not die after the events of HOU (The other gods had a card to represent their way of their death as a Cycle, though Hazoret had a differing idea for this entirely.).), will seriously make Samut Livid beyond the fact that Sorin & Nahiri still have yet to put their differences aside at once, & Nicol Bolas is a common foe of theirs; same for Ugin (Not as an ally of Bolas, obviously.), who I feel might be the last Walker to be revealed in WAR. & the only one to cease a multi-century long conflict with the other Members of The Three.

2: Where is our Jace's Triumph? All the other default Gatewatch members got their Triumph already, so is Jace the true Failure trying to beat Bolas, & his (Now, Pumped up w/ more power) Eternals?

I know this is for another area entirely, but after trying to update my Superfriends Deck again via a Primer, this isn't going to end well, now I have a lot of Walkers to handle in such a thing... Over 120 in my deck, & still growing. I think it's about time some actually use Deploy the Gatewatch â¦

Though, then again, I'm trying to search for a list of cards that can stop Walkers dead in their tracks... I wonder if one even exists...