Render Silent occurrence in decks from the last year 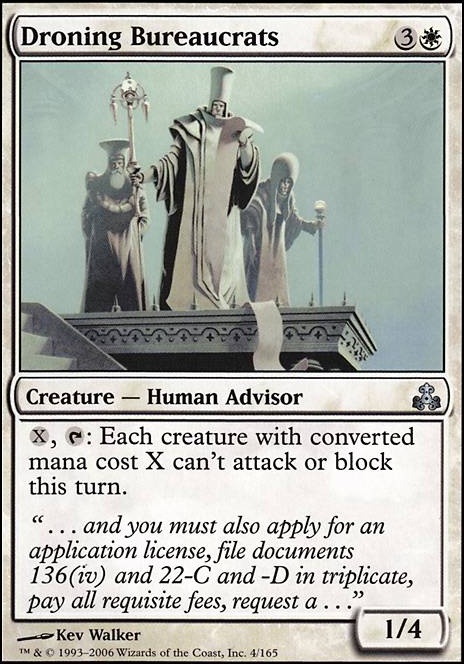 Mind Over Matter
by DemonDragonJ

Omniscience_is_life thank's for the suggestion. I intentionally left any infinite comboc out of the deck, since I don't like them anymore. Also I'd rather win with aggro rather than mill, but this is just my opinion :)

TrollDecksOnly thank you for the kind words! This is also one of my absolute favorite decks. For the OG duals I would remove one of each basic, since you can also fetch/tutor them. I personally would only add artifacts like Mox Diamond or Chrome Mox. Mana Vault for example won't do much to help cast your commander earlier, so I'd probably let them out. To make space I would remove something from the "Counter" section (maybe Render Silent and the like).

Hey, I've got to start by saying that if this is your first deck, I think you've done a pretty good job so far, from what I can tell. I was quite terrible at building for my first few attempts at creating a deck. Anyway, as for some suggestions, I'll start by reiterating what Vash13 said: Lands are important. I run an average of 36 lands in my Commander decks, because running out of mana and steam is never a good thing. Though, I will say that your mana rocks are looking quite good...

Anyway, I don't know if you have a specific angle for your deck, as I normally do when I build some, but if you are leaning into stealing other people's stuff with Sen Triples' ability, then I have a few ideas. Telepathy is an interesting card that, especially in 4-player games, can really push things into your favor. Get that out turn 1, and you'll never be caught off-guard again. My brother has a Sen Triplets deck, and I can't tell you how many times he'd won with Approach of the Second Sun, it is quite a good card. As for control, Narset, Parter of Veils slows your opponents down, and can help dig into something you need. Teferi, Time Raveler is also a good form of control, being able to bounce scary things and protect your turns.

As for a few other ideas, Hero's Downfall and Swords to Plowshares are excellent removal, and Flusterstorm and Render Silent or both excellent counterspells. I hope these suggestions help, and good luck with your deck and deck-building.

From the window to the WALLS

What about a good ol' Tower Defense? This list looks pretty competitive, so I wonder if something like a Dispel or a Mental Misstep might fit better than your Render Silent.