Landfall â Whenever a land enters the battlefield under your control, Baloth Woodcrasher gets +4/+4 and gains trample until end of turn.

Lord of the Land
by mrmayhem2 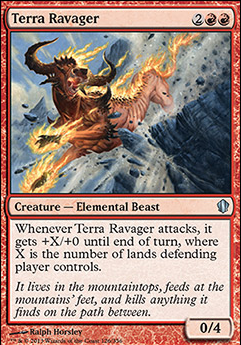 so ive worked more on this deck and it seems to play best when i bounce/play a lot of creatures early on in games to overwhelm my opponents before boardwipes and such can play out. i realize this deck is over half creatures which im told is too many but with the abilities of my commander it seemed to make more sense playing creatures with the abilities/effects im after instead of running artifacts and enchantments. one thing im trying to find still is win cons after the fact, im runng things that get big off landfall triggers like Baloth Woodcrasher and have looked into just pumping my creatures with Primal Forcemage , Goldnight Commander / Good-Fortune Unicorn but dont know if its enough to win against good decks so any and all advice is greatly appreciated.