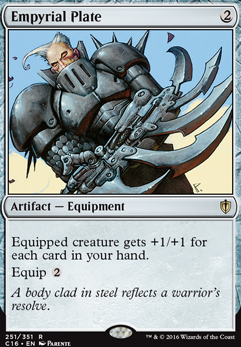 Kefnet the Mindful Is a low costed 5/5 flying creature with indestructible that can draw you cards, so you know he has to have a downside. In order to attack or block, you need to have seven or more cards in hand. With this list, I tried to find the best cards for each category (ramp, counters, creatures ect) that replace themselves so that we can keep our hand full while also getting a useful effect. Further more, since this is at its core a voltron deck, I tried to select the most efficient and effective equipment possible. We aim to get Kefnet's power to seven while gaining other abilities. At seven power all the way to ten power, we can three shot an opponent, and getting to seven power is very easy. It is possible to two shot, or even one shot an opponent with certain equipment, but it isn't necessary as we need to control the game as much as possible, which means we need to have mana open as often as we can. Keeping Kefnet alive isn't too hard, but he is still vulnerable to bounce spells and exile effects, and can easily be blocked by other flyers. A timely counter or mass bounce spell is key to victory.

Sword of Feast and Famine : This is by far the most powerful and most useful equipment in the deck. This card is a control players dream! Not only do we get protection from two very powerful colors, we also get the power boost we want, we get a bit of hand hate, AND we get to untap all of our lands. This opens us up to do whatever we please on our opponents turns, weather that be filing our hand, countering pesky spells, or clearing up the board of creatures. Perfect 10 in this list.

Sword of Fire and Ice : Porbably the second best equipment in the deck. We get a bit of removal or extra damage that we can aim at planeswalkers if needed, and we draw a card which is obviously great. Having pro blue is pretty huge, too.

Sword of War and Peace : Not the best of the swords, but having protection form white is the most important part of this card. With that, we eliminate exile effects like Swords to Plowshares and Path to Exile . The life gain can be pretty relevant as well, it could keep us in the game long enough to get the W.

Champion's Helm : Underrated equipment. The power boost is perfect for this deck, and hexproof is never bad.

O-Naginata : A very cheap way to get a big bump in power and trample. It is also the only equipment in the deck that can be tutored up by Trinket Mage . This took the place of Loxodon Warhammer because it is far easier to cast and equip. Losing lifelink isn't a big deal.

Fireshrieker : This makes Kefnet a three hit kill by its self, but if you pair it with another equipment, we get a two turn clock. Unless you combine it with...

Empyrial Plate : This give our commander a MINIMUM of +7/+7, its cheap to buy, cast, and equip, and if you combine it with the above artifact, someone is going to have a bad time.

We have a fairly flexible and effective, but not overbearing, control package with this list. For mass removal, we have Nevinyrral's Disk , AEtherize , Cyclonic Rift , AEtherspouts , Evacuation , and Engulf the Shore . Most of these spells don't have much of an effect on us, but can cripple the rest of the table.

Our counter package isn't the best, but it's good enough to slow things down and protect us and Kefnet. I tried to include the best counters that draw a card, because of the whole seven cards thing. Remand and Arcane Denial are the best of the bunch. Our more flexible and more powerful counters are Cryptic Command and Mystic Confluence . They can do a combination of counter, draw, bounce, and tap our opponents stuff for a reasonable cost. Also included in our control package are two spot removal spells; Into the Roil and Imprisoned in the Moon . The later is especially powerful because we can turn a commander into a colorless land for the rest of the game (potentially). Venser, Shaper Savant is very flexible. We can "counter" un-counterable spells or bounce any permanent back to our opponents hand, and can be an good blocker at instant speed. I may include ways to abuse him in the future, but for now, he is a one time use. And, of course, no mono blue deck would be complete without a Snapcaster Mage . This card is simply amazing. I will also include Standstill in this portion, since its really hinders players form doing things. Nobody wants to be the person to have the rest of the table draw three cards. Most of the time, if someone does cast a spell with this on the table, its going to be pretty powerful, so it could be a prime target for a counter. The best is when you draw a counter off the cast trigger. :)

Back Up Beat Sticks

Stormsurge Kraken : A hard to deal with 7/7 that no one wants to block? Yes please!

Nezahal, Primal Tide : This guy could be our commander if it weren't for his CMC. Outside of that, whats not to love? A 7/7 that can't be countered, no max hand size, draws us cards by just sitting there, and is hard to get rid of.

Sphinx of Magosi : Its ability to draw us cards cheaper than Kefnet combine with getting bigger every time we do is pretty strong IMO. More times than not, this guy is a total sleeper. Your opponents will likely be more focused on how to deal with Kefnet and leave this guy alone until the get smacked for a bunch of damage.