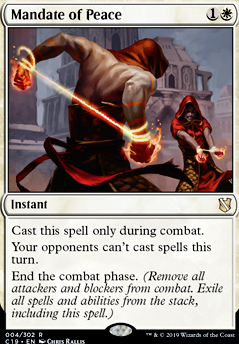 Cast this spell only during combat.

End the combat phase. (Remove all attackers and blockers from combat. Exile all spells and abilities from the stack, including this spell.)

Avacyn, You Play at my Level
by KingLonsur

Ink, Quill and Politics
by TRANScend

One Fox Makes a Big Difference
by RelinquishedAttempts

Caerwyn I quoted my source, and that source quotes this article from the head designer of MtG, so you might think my view is flawed, but at least it's consistent with the way magic cards are created, which is probably relevant in this discussion.

On top of that, I'm not sure if you can distinguish order from peace, if you enforce order in the proportions of your evil white example. When all citizens obey and uphold the law, after it has been violently implemented, there's no room left for conflict, especially no violent conflict, as that would violate the established order. If you crack down hard on violations of order, you're doing it in the name of peace, of ending conflict.

You can fight for peace like the Avengers, or fight for peace like Thanos or Ultron. It's possible I refused to see the flavor text's portrayed conflict as a white vs white one, because the masses who rise up to an emperor, would do so to improve the situation for the many, even at the cost of their own safety. The good of the many outweighing the needs of the individual is a textbook example of white, a lot more so than an oppressive emperor.

Alright then, my second objection to Mcat1999 's suggested flavor text: quenching an uprising feels a lot more like an example of Mandate of Peace , than a Stifle . The masses rising from the slums, raising swords feels like a depiction of the combat step, way more than the activated ability of a creature or planeswalker.

MagicMarc on Feelings On Fogs?

The second line of Mandate of Peace makes it even better than a Fog effect. That is a great control option for Isochron Scepter abuse like Orim's Chant. Why is it 50 cents American when Chant is like 18 US dollars?

Heck, it even affects all players?

I get that. I want to fit Mandate of Peace in a couple decks but would either have to cut a synergistic piece or a counter. They really need to make edh a 101 card format.

Fogs can be good and are typically underrated. Mandate of Peace is a good example of an underplayed card.

A fog can stop a craterhoof or shutdown that voltron commander that was just given double strike.

Also, nothing is better than playing Batwing Brume on a kiki-jiki combo player.

"How many are you swinging with?"

I'm not a strong player, so I feel like I don't know how to properly play this deck. To me, I feel like the artifacts and enchantments play a huge role on bring the angels out/mana ramp/draw. So with your recipe, I removed Chancellor of the Annex, Mana Tithe, Mandate of Peace, and Orim's Chant, because they were in my hand at the beginning of the game till the end of the game. I just didn't know what to use them to their full potential. I'm currently thinking on what to replace them, and so far I have Venser's Journal (I barely had any chance to lifegain the entire game), Dawn of Hope, Argivian Find, Idyllic Tutor, and Herald of the Host. Herald of the Host CAN be really good because it also activates Vanquisher's Banner for extra draw, and that's alot of lifegain if you have many players, but it's very situational, so I don't know...

Thoughts on these? Silence, Archaeomancer, Savor the Moment, Plea for Power, Lich's Mirror, Tidal Barracuda, Vampiric Tutor, Lotus Petal, Vanishment, Cloud of Faeries, Decree of Silence, Coveted Jewel, Oubliette (see double masters errata; can now phase out opp's general indefinitely), Grand Arbiter Augustin IV, God-Pharaoh's Statue, Mandate of Peace (ask during opps' upkeep for them to let you know when they are going to combat. They will likely go straight to combat before casting things, allowing you to play this most effectively)

I think cards like Mandate of Peace , Containment Priest , and Rakdos Charm are better cards to stop combo (rather than Rule of Law ) while letting other players have fun. Also, most of the infinite combos in EDH doesn't require "casting" spells and are often infinite reiterations of an activated ability loop (walking balista/mike etc.) so it doesn't really stop them from going off. Most combo decks also basically save their removal till the turn they go off so having that card doesn't really achieve anything other than feel bads. From my personal experience, rule of law effects often draw unnecessary negative attention towards me since players often want to play multiple spells a turn in EDH. Unless this is a dedicated stax build, I just don't think it is worth it. Just my 2 cents.