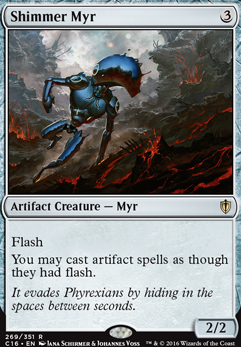 You may cast artifact cards as though they had flash.

Shimmer Myr occurrence in decks from the last year 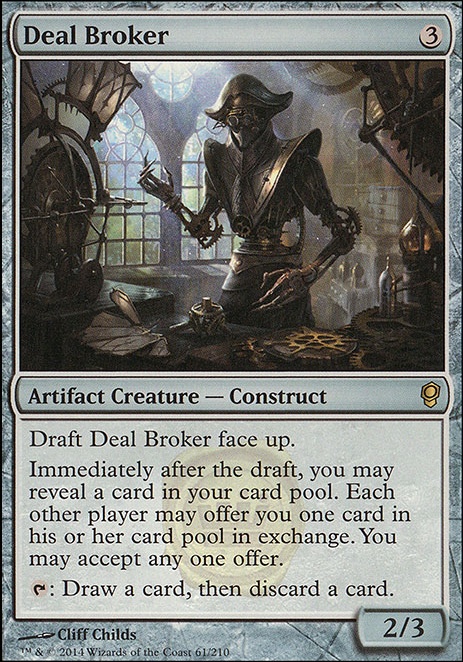 Emry, Lurker of the Loch - Artifact Combo
by opiegohard095

Thank you very much for your detailed answers. I did a couple of test games with your deck and your Teshar-deck has won all my respect. Congratulations on this fantastic deck building! I quickly realized how strong Shimmer Myr, Emergence Zone, Shriekhorn, etc. are, which I was initially skeptical about. And indeed: Verge Rangers would be too slow on the deck. Too bad that Fiend Hunter has toughness 3. Creatures exiling permanently would be chic. One question remains: I saw the Claws of Gix card in other deck lists. What do you think of the card? I think, any-permanent-sacoutlet sounds pretty cool.

I made a relatively similar deck with Kinnan, Bonder Prodigy as commander. Mishra's Workshop might be good in your deck, but it is very expensive. I also found that Shimmer Myr or Vedalken Orrery go very well with Unwinding Clock. Looks good!

multimedia Thanks so much for the suggestions. I really appreciate them.

I don't even argue that card draw and flexibility early wouldn't be a nice asset to have and some of the games i really could use some extra cards to get faster to Kozilek. The problem is just: the only times i got stuck on my way to 10 mana is when my board gets wiped midgame or someone removes a key piece and sets me back. There's been times where that took me out of the game completely.

But if my board does end up getting wiped, most of the times it would remove these tools as well. Not even mentioning how these cards need the synergy with each other. They all run danger of doing a lot of nothing by themselves. My personal experience was (and that might very well be local meta related) that my number one goal is to get to 10 mana, cast Kozilek and try to slowly get a stable grip on the game.

I've had Unwinding Clock and Basalt Monolith in a very early version of the deck and i cut them because i've had so many situations where they didn't do a whole lot.

Desolation Twin - i agree actually. I wish it was a little better. It usually ends up being a slow clunky play. I would cut it.

Pathrazer of Ulamog is quite nice here, because i got so much haste sources and Annihilator effects are my bread and butter.

Platinum Emperion is one of the nicest cards i've recently added to the deck. It single handedly saved my ass in so many games. (But again: might very well be my local meta)

Bane of Bala Ged a cheap annihilator-ish effect for mid game. I kinda love that one.

Overall i really like the idea of making the deck more flexible and quick. Especially with the Deal Broker, Unwinding Clock and Shimmer Myr combination, but to be honest i would have to go back to an older version of the deck like Ashlen's Kozilek I Game Knights #24 (it was actually my jumping of point), which had much more artifact synergies like the Unwinding Clock in it.

The way it's set up right now i would describe as one of the dumbest, yet okay decks in EDH. Ramp and bam! So in a way your suggestions are basically too smart. ;)

Deal Broker, ignore the bullshit draft text, it can be a repeatable source of draw and it's an artifact. Unwinding Clock is good in muliplayer Commander when playing many mana rocks to make mana on each of your opponents turns to pay for mana sinks or cast cards. Use it with Broker to draw into your deck. Unwinding untaps artifacts that don't normally untap such as Mana Vault. Basalt Monolith is another source of colorless mana that doesn't normally untap.

Shimmer Myr is a way to use mana from rocks on each of your opponents turns to cast artifacts. Shimmer is very good with Mystic Forge. Mind's Eye repeatable source of draw and Unwinding with rocks gives you mana to pay on each opponents turn.