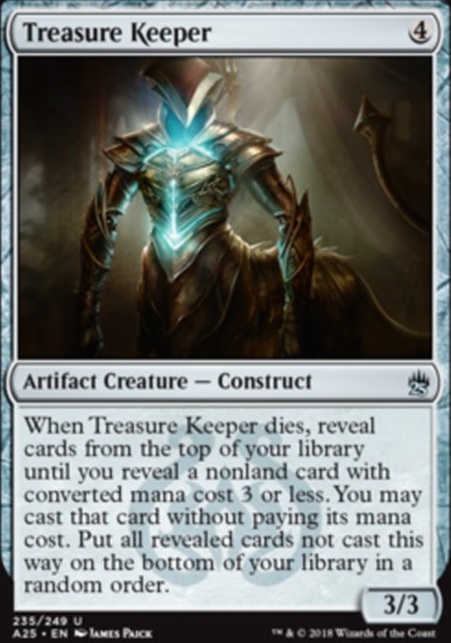 When Treasure Keeper dies, reveal cards from the top of your library until you reveal a nonland card with converted mana cost 3 or less. You may cast that card without paying its mana cost. Put all revealed cards not cast this way on the bottom of your library in a random order.

Treasure Keeper occurrence in decks from the last year

LeoSushi - thanks for the input. I really like Treasure Keeper and Throne of Geth , they seem like a solid options. I looked at Marionette Master when I was putting it together but I didn't like the high CMC and BB in the mana cost. I ended up going with Noxious Gearhulk instead, but I can try out Marionette Master and see which I like better.

Carrion/Viscera/Bombardment are all good sac outlets, but don't really fit the flavor I am after with the deck. Same is true with the graft creatures. I'm positive they would be good additions to a normal Marchesa/counter build, but I want to keep it artifact/affinity flavored, even if the deck is a little worse for it.

Thanks again for the feedback, I appreciate the help :)

Urza, Budget as I Can Get

And Foundry Inspector over Treasure Keeper . Keeper has to die to get the trigger, and that isn't always guaranteed whilst Inspector provides a passive cost reduction to most of the deck. It's also pretty cheap.

Another suggestion would be Grafdigger's Cage replacing Ensoul Artifact . Ensoul Artifact doesn't seem like a good fit as making an artifact bigger doesn't seem to do much to help Urza, whilst stopping graveyard strategies is a big upside to prevent opponents from winning.

Played the first two games last night.
Game one: The deck proved very resilient for the most part. The exception was global graveyard hate coming from one player. We all ganged up on him and the deck pulled through for the win. Game two: The deck stalled at three mana and a Maze of Ith until it was too late for a comeback. I might need to add some smaller mana-rocks or dorks to speed things up. The deck might also need a little balance toward low-cost artifacts to swap out.