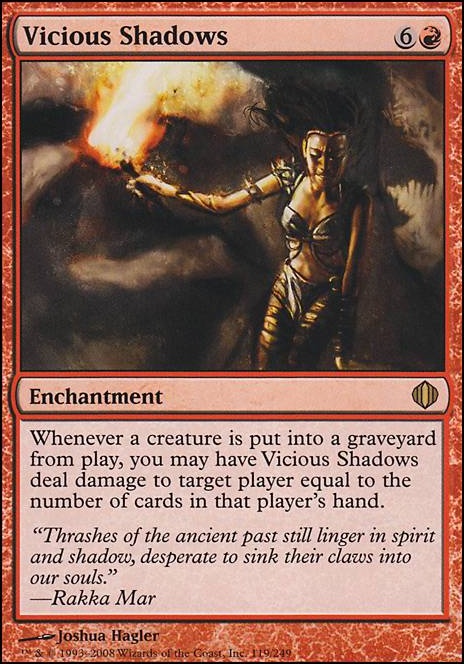 My Pride and Joy: Rakka Mar

Before Ajani Vengeant had Lightning Helix ed Rakka Mar in Alara, she spent her time wreaking havoc in my play group.

The goal of this deck is to use a plethora of activated and triggered abilities to pull of combos using various pieces throughout the deck, typically winning through some sort of burn ability such as Impact Tremors .

This deck also utilizes incremental burn effects early to mid-game in order to remain viable throughout the contest.

The Evolution Of Rakka Mar

January 2018. The idea for this deck came into being through one simple interaction: Rakka Mar + Skullclamp . So simple and unassuming, yet so dangerous. For this purpose, and for the fact that I enjoy using unassuming commanders, Rakka Mar will lead this deck, and always will.

I'm a firm believer that mono red would be the single best color in commander if you could consistently draw cards. Running out of gas is painful. Topdecking is painful. Mono-red, however, is not.

Rakka Mar began as an Elemental/Shaman tribal deck mixed with ETB triggers. This idea was a tough build due to the constricted theme, and lack of effective cards. This paved the way to use different cards as support for my deck, which ultimately became the shell in which this deck was built.

After making an appearance in my playgroup and demonstrating powerful performances, it became clear that the most effective cards and strategies in this deck had not include many Elementals or Shamans at all, causing me to strip most out and fill in with a better strategy. Thus, Combo Rakka Mar was born.

On a basic level, The engine is simply Rakka Mar + Skullclamp . Paying to draw two cards is great, especially for mono red. However, through in Thronbite Staff and suddenly you can pay any increment of to draw that many cards x2.

Expanding on that, we also receive an ETB trigger and a death trigger, which opens up for the possibility for our combos...

This has multiple ways to achieve the primary combo. At a basic level, the combo is "Sac outlet + Token Generator + ETB/Death Trigger + Thornbite Staff ." While 4 card combos are typically unreliable and excessive, this deck has the luxury off being built with multiple of each category, meaning that it is much more feasible to create the combo.

These are essential for the combo to exist. There are more that I would like to include ( Thermopod being one of them.)

These are top-end bombs that can quickly and quietly close out the game in a removal heavy meta such as mine. Vicious Shadows is particularly sneaky, as it counts any creature instead of just yours.

This is a list of alternate combos that I've discovered through trial and error that have proved to be deadly:

Using champion triggers to continuously loop ETB effects was an accident I discovered, but it proved to be game winning when no one could stop it. This works with or without an elemental to champion (though I prefer using Tyrant of Discord to champion for repeated effects).

The combo works as such:

Having Flameshadow Conjuring on the field, cast Nova Chaser . --> Stack ETB effects so that the champion trigger resolves last. --> Pay to may a token copy of Nova Chaser --> Use the token copy to champion the original creature --> Sac token Chaser and original Chaser ETB's --> Repeat for infinite death/ETB triggers.

Overall, this deck is something I have become incredibly proud of. Being the most unique Rakka Mar deck I've seen - and for it to perform as well as it does - really means a lot to me. I would love to hear any feedback you may have, and if you enjoy the deck tell your friends.