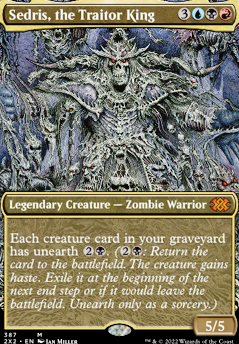 Grixis Snow Zombies centred around graveyard recursion, swarm of creatures and a few snow effects. A little light control never hurt anyone either.

It has been established that persons who have recently died have been returning to life and committing acts of murder. A widespread investigation of funeral homes, morgues, and hospitals has concluded that the unburied dead have been returning to life and seeking human victims. It's hard for us here to be reporting this to you, but it does seem to be a fact. - Newscaster, Night of the Living Dead (1968).

The name of the deck is more of a pun on Black/Blue/Red Zombies than references to the show, but that aside here be a very fun Grixis Zombie EDH Deck with Sedris, the Traitor King at the helm (in the lovely new borderless might I add) centred around recursion and swarming.

Thematically the recusion is juciest element. Sedris can bring back any creature if we require, but there are many other ways to do so. Alongside this, I wanted the feeling of a overwhelming wave of the undead, so there's plenty of cheap creatures and token generation.

You'll notice the inclusion of 5 different Liliana's too. I'm not cringey reddit weirdo who draws fan art of Lili, I just like planeswalkers and they all either bring many creatures back from the grave or help create more zombies.

There's a few mana fixers, Arcane Signet is a obvious inclusion with Obelisk of Grixis being a cheap card to pick up to help with specific colours. Replicating Ring is great for the longer games and helps to buff Dead of Winter when required.

Let's get into the meat of it.

Theyâre coming to get you, Barbara. - Johnny

Many zombies go smash... is the main gameplan. However, just swarming and beatdown isn't our only way to win - but it definitely is our main one. Thraximundar, Wight of Precinct Six and Grimgrin, Corpse-Born all become massive very easily - and we'll come back to the latter one in a minute too.

Josu Vess, Lich Knight, Diregraf Colossus, Army of the Damned, Liliana's Reaver and Necrotic Hex provide a consistently high amount of 2/2 Zombie tokens, clogging up the board and pushing through a lot of damage.

All of the lord cards help to buff up these tokens too (as well as any of our non-token creatures), meaning they won't stay as 2/2's for long.

There is a few different combo's that work nicely together, but the main game ending infinite combo is a bit Disneyland in terms of setup. However, the shell has many uses:

Sac Gravecrawler with Grimgrin, cast from grave for free with Rooftop storm = infinite loop. Diregraf Captain is the easiest game-winning addition to this (for â¾ï¸ damage). That being said, here's a few other spicy ways it can work:

And some maybeboard cards I am considering can go off with this too:

There's a few simple spells to get some creatures from the grave to hand or battlefield. Ghoulcaller's Chant, Raise the Draugr, Rise from the Grave, Zombify, Unearth and Gravepurge cover most of it (with the latter being the least effective, but a great counter to someone attempting to exile our grave).

The aforementioned Zombie Apocalypse can create a near unstoppable board state, Zombie Master keeps many of our creatures alive, whilst Lord of the Undead brings back most of the ones we wouldn't want to exile with Sedris. Narfi, Betrayer King barely feels like he leaves the battlefield, Gisa and Geralf make sure to keep the recursion consistent.

Liliana Vess -8 is almost never going to happen but is glorious when it does, Liliana, Death's Majesty can pop one right back with her -3 and Liliana, Untouched By Death has a -3 that works wonders. Liliana, the Necromancer has a neat -1 but generally is served better by constantly ticking her +1 up.

Blood on the Snow is great at bringing back any of the Liliana's or our most needed creature, and with so many ways to bring them back it rarely feels like a trade in terms of board state. Dead of Winter is the same feeling, but gets around indestructable.

For spot removal, I love Feed the Swarm - sure it can hurt, but being able to hit enchantments too is huge. Bone Shards is the easiest inclusion in the deck (especially with Gravecrawler hanging around). Drag to the Underworld and Poison the Cup are just cheap (Â£) removals with an upside, and Murder is a classic.

There's a selection of counter spells to help stop the threats we might otherwise struggle with, and Graven Lore helps us dig for the right cards as well as Village Rites.

We may not enjoy living together, but dying together isn't going to solve anything. - Helen Cooper

These are the cards Iâve included purely for budget reasons, and cards that are 'expensive' (to me at least) that I intend to put in:

Remove Eventually: Drag to the Underworld and Poison the Cup for the same reason - cheap and does the job for now. Lands: I'm keeping with snow lands for now but they aren't a necessity, and there are obviously great dual lands etc that I can put in.

Add Eventually: Quite a few from the maybeboard have been considered, but these are the next on the list to be added: Relentless Dead

There wasn't a sign of life left, except...by now, there were no more screams. - Ben

Any feedback is appreciated! Originally the deck was a super casual and relatively budget build around Thraximundar but as times changes (and Sedris' new art came out), I decided to take it more seriously. Still feeling it out though so any suggestions are welcomed!