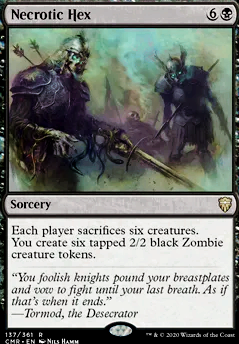 The Haunting Presence
by Deconstructionist 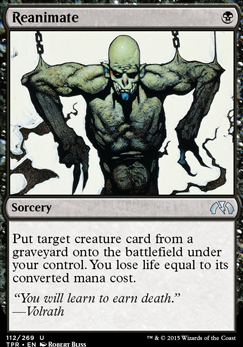 In Bloom
by Deconstructionist

The Marauding Horde [WIP]
by Housegheist

Another option for tokens would be Feral Incarnation

By the way. I would additionally add Necrotic Hex in the token category.

I was looking thing over again and you might want a board wipe or two and maybe upgrade the removal options.

Soul Shatter and Eat to Extinction are solid options. Soul Shatter hits everyone's biggest and sometimes you want to exile something more than destroying a creature. I'd swap Murder and Naturalize for these two.

For board wipes my recommendation is Extinguish All Hope and Necrotic Hex I'm not sure what I'd swap out for these though.

I appreciate the rec, Gontilordofmtg!

I know a lot of people are also running the Clock of Omens combo in addition to the Cloudstone Curio combo in their Magda builds, but for the moment I'm trying to avoid any infinite combos. I've actually been having a lot of fun using her as a sort of toolbox commander.

As for Sarkhan the Masterless , I still have yet to play him in a game. My hope is that my dragons, changelings, and changeling tokens from Birthing Boughs will be enough to dissuade people from swinging in when my dwarves are already turned sideways. Plus I think he's pretty flavorful for the deck.

I'd be curious to know if there are any other dragons/artifacts you think would be good tutor targets to function as removal or protection from removal. I managed to dodge a Necrotic Hex via Worldgorger Dragon in my last game, and it was hilarious to see everyone's reactions.

Opposition Agent and Hullbreacher for control.

Mindslicer and Living Death are a must.

Price of Fame works well with its surveil ability (you can discard creatures in graveyard and use them with your cmd), plus is an excellent removal.