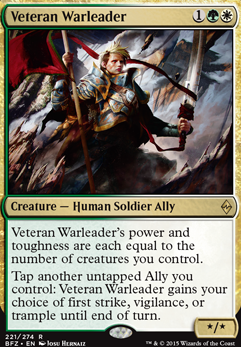 Veteran Warleader's power and toughness are each equal to the number of creatures you control.

Tap another untapped Ally you control: Veteran Warleader gains your choice of first strike, vigilance, or trample until end of turn.

First off, there are a number of cards that are just not good enough for modern. Veteran Warleader requires you to overextend a board state. Putrefy is outclassed by Abrupt Decay, Cast Out is normally a worse Oblivion Ring, and Retreat to Emeria is kind of just meh all around.

Next, what do you want the deck to do? The way you currently have it set up, it looks like you wanna win fast. Your land count is low, and you are running a lot cof creatures. In which case, why not run Naya Allies? They are fast and Lightning Bolt provides a lot of reach. I would say the strength of abzan allies is the amount of interaction you are afforded, and therefore you might be better off upping your land count and trying to aim for a more midrange shell.

To further Allies as a midrange shell, let me explain the importance of a few cards. The most impotant cards for a midrange shell are Kabira Evangel, Ally Encampment, Gideon, Ally of Zendikar, and Collected Company. I think a strong argument can also be made for Aether Vial -- and in some lists, Orzhov Charm. Allies get big fairly fast -- but they do not start big. Therefore, if you want to be able to outscale other midrange decks, you need to be able to protect your board state. You do this by dropping an ally every turn so that Kabira Evangel can keep them safe. Gideon, Ally of Zendikar and Ally Encampment are super good at this. However, if your opponent is smart, they will then just hold off their removal until their turn when the effects wear off. These are the times that Aether Vial, Collected Company, and Orzhov Charm shine. All of them allow you to trigger your Ally's abilities at instead speed. The combo of Ally Encampment and Aether Vial is especially potent here as it allows you do trigger abilities even when both you and your opponent begin to top deck.

K so all my creatures get:

Some of your allies can be replaced easily by other allies!

Target for replacement : Cliffside Lookout, Expedition Envoy, Goblin Freerunner, Kor Scythemaster, Vizier of Tumbling Sands (Blasphmey, it's not an ally!), Tajuru Pathwarden... and many others, almost all the common quality ones.

What to KEEP in the instants, sorceries, artifacts and enchantments (you can replace the rest) ;

Sorceries : Bring to Light, March from the Tomb and Sylvan Scrying.

Now that we've cut about 17 cards, what to replace them with?

Recursion : Patriarch's Bidding, Aphetto Dredging, Eternal Witness (I know, it's not an Ally, blasphemy! But it's still too good to pass up), Living Death

I know some of these suggestions are maybe not budget, but the impact they could provide is good nonetheless.

Well, Sol Ring is illegal on modern so i would start by cutting them out. Also, you only have 10 lands? 22 would be appropriate.

Your deck has some really slow cards like Nissa's Renewal and Zendikar Resurgent, i would cut those out. The lifegain theme you have going on is ok but there is not a lot of synergy around it, the only card that makes use of it is Serene Steward and that's is just not enough to justify having so many cards that basically just gets you some life.

If you really wanna go the ramp/combo way you currently have try taking out the mentioned cards to add Beastcaller Savant, Kalastria Healer, Cliffhaven Vampire, Veteran Warleader and maybe some Sword of the Animist to help ramp and fix your mana. Anyway, add some more lands to your deck, please.

A Token of My Appreciation

Veteran Warleader might be a good fit in this deck.

Here are some low cost suggestion:

It all depends on what you want to do.

Why not run human ally as well? Lantern Scout is great. With a couple other cheap creature allies. Like Expedition Envoy and Veteran Warleader