Destroy target artifact or enchantment, then populate. (Create a token that's a copy of a creature token you control.) 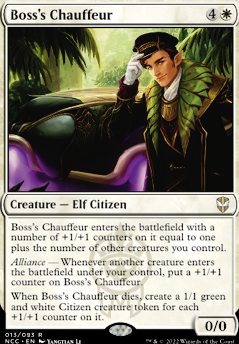 Sundering Growth might be a better choice for artifact removal over Root Out, cheaper CMC and helps you make wolf tokens.

People are the Biggest Monsters

The deck looks very solid - it's smart that you included so many ways to spread indestructibility around, since board wipes are basically the only answer to a deck that builds up this many fearsome creatures! That said, there are a few card slots that I'm more... skeptical of. Possibly there's an opportunity to tighten these spots up!

Demystify is something of a, well, mystifying choice. It gets the job done, but even for the exact same mana cost there are a number of strictly superior options, including Erase, Wax / Wane and Light of Hope. For your build in particular, you might prefer something like Sundering Growth for the added effect and ability to nail artifacts as well. Since you're running very few ways to deal with artifacts, finding room for options like Nature's Claim, Sylvan Reclamation and Aura Shards is probably worthwhile!

The card advantage and lifegain of Camaraderie is great, but since you're aiming to grow such a buff army, you might find you often get more life from Shamanic Revelation, which even costs one mana less! The only advantage of Camaraderie is really the +1/+1 which feels pretty minor at six mana.

One other choice I was curious about was Mentor of the Meek. Normally he's great card advantage for a white deck, but seeing as your commander quickly gives all of your creatures a big static boost, it might quickly be the case that you never have a creature with power 2 or less coming into play, even if they're a 1/1 token. Do you find this ever backfires, or Kyler is active rarely enough that it doesn't often overlap?

To support your strategy, a few other cards that might be a good fit in this build come to mind. It's a little slow and clunky, but Hydra's Growth might be a great way to achieve truly ludicrous size on Kyler. Deftblade Elite is a super versatile one-drop that can do it all: help your other creatures get past blockers, or hold off a deadly attacker indefinitely. Thanks to the boosts your commander is handing out, though, it's conceivable that the Elite could quickly get big enough to kill off a utility creature every turn thanks to Provoke, too! Mother of Runes is also a superb one-drop that is great for protecting your commander from any unwanted interactions.

I haven't tried making a human tribal deck, but recent sets have definitely give players some interesting new options to work with so it was a bit fun to see if I could find some budget options to suggest. There's probably a lot more, I was mostly going off of cards that jumped to mind.

I think that you'll see a noticeable improvement in the deck if you work in some more removal though. A lot of decks these days leverage particular cards to make big plays so being able to efficiently interrupt those plays will help improve your win-rate overall. Something like Sundering Growth, for instance, might fit better than similar alternatives since Populate could help you squeeze a little more value out of the card. Oh, and the new Cathar Commando is a card worth picking up multiple copies off to use in decks, especially this one because you can potentially get multiple uses out of it thanks to Sun Titan.

You'll probably want at least 2 more instant-speed creature removal spells as well. Path to Exile would be a good one, but that's pricey for just a piece of removal if you are sticking to a budget. Something like Seal Away or Stasis Snare are less good but might be worth looking at since they are also cards that Sun Titan can get back if they go to the graveyard. Green has some options like Ram Through but they require you to have big enough creatures on the board to be worthwhile, which is a bit iffy for your deck because a lot of your creatures start off smaller. Beast Within is a popular option because it can hit anything but it can be a little pricy depending on what printing you get. It's a card worth shopping around for though because it's always worth having a few copies in your collection as staple commander cards.