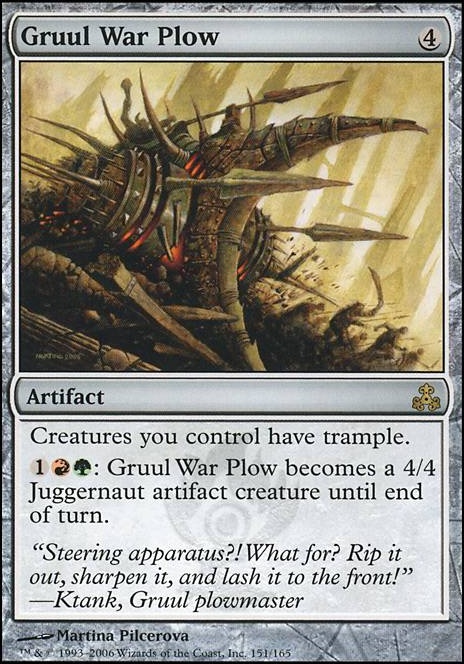 Creatures you control have trample.

due to this being very tribal, have you considered Door of Destinies? giving all your cats a huge stat buff is good; while it's a targeted version of Coat of Arms, the effect is dependent on spells cast, not creatures present. i also have a cat deck and i have 2 DoD as well as Gruul War Plow. those two together demand an answer, otherwise even the lowliest creature is a monumental threat

Donât forget about Gruul War Plow ! So much flavor, and trample is always good!

FormOverFunction on suggestions are welcome

Iâm always looking for an excuse to play Gruul War Plow because itâs rad. People may be less inclined to block, as so much will trample through...but doubling the power of a now-trampler seems fun...

I love where this is going! What do you think about Fires of Yavimaya, Gruul War Plow, and Bow of Nylea to make your combat more scary?

As for what to cut, I'd say that you now have better ways to grant trample besides Gruul War Plow .

Petrified Wood-Kin seems a rather mana intensive, but I'd say give it a try before writing it off, since I've never played it before.

Burning-Tree Emissary is one cool gruul, but a "free" 2 mana 2/2 doesn't really provide much utility for you.

My overall rule of thumb is to try out the different cards when you can, to see if you like how your deck plays. Over time, you'll get a better sense of what your deck does and what best fits the theme or your playstyle.

Sorry I couldn't be of more help with cuts, hope this helped a little!

The Commanding Wings Of Heaven

In CMDR you can't use colors outside of your Cmdr's color identity. for example, You have Linvala, Keeper of Silence as your CMDR, but you have Gruul War Plow in the 99. Gruul war plow has in the text box. therefore its color identity is .

In short color identity refers to the casting cost colors, and the colors in the text box, (excluding the reminder text).

Other things to consider when referring to this edh rule is, if the card has mana symbols outside of you CMDR color identity you can't use them in the 99 but if the colors on the card are written out its legal like you can run Urborg, Tomb of Yawgmoth in your deck. Witch I'm going to recommend for your deck along with Kormus Bell because Urborg, Tomb of Yawgmoth + Kormus Bell turn everyone's lands, into swamps, witch turns them into 2/2 creatures. so when you have Linvala, Keeper of Silence in play, your opponents cant tap lands for mana, because it's a creature now, and linvala says no to activated abilities of creatures you opponents control. If you run that combo might as well run Elesh Norn, Grand Cenobite