Other Wolves and Werewolves you control get +1/+1.

At the beginning of your end step, if you didn't cast a spell this turn, create a 2/2 green Wolf creature token. 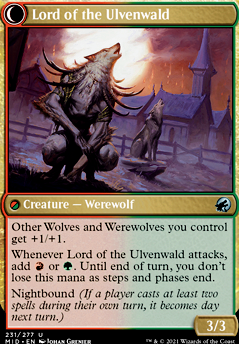 Who Let the Dogs Out?
by elk88

What about Nightpack Ambusher? Heâs a solid lord on his own and rewards you for not casting spells on your turn to trigger Nightfall. Plus his flash gives him good

Hi garruk2198,thanks for your comment. Nightpack Ambusher it's vert strong in this deck! And i put Frilled Mystic in a maybeboard,it's interesting ^^

Nightpack Ambusher and Frilled Mystic are must adds. Probably four of as well.

If you're trying to go for a flash theme, Nightpack Ambusher works very well. I prefer Grafdigger's Cage to Tormod's Crypt, though that's just preference. This deck looks great otherwise!

Agent of treachery was a great theme add for Hans. It does exactly what he did. Steals someoneâs loyalty and tries to profit off it.

Clairvoyance has a lot of similarities in the art to the pace we meet Olaf, Hurricane looks like when the ship goes down, Caribou Range would be an easier-to-include version of the reindeer run (though caribou arenât reindeer...), Blizzard feels like another potential version of the storm, and Nightpack Ambusher has great art for the wolves scene, not to mention that itâs ability brings along the rest of the pack.

BTW, for most of these, I was looking at the art from ICE