Odric, of Pride and Prejudice EDH
by Ark3nemy 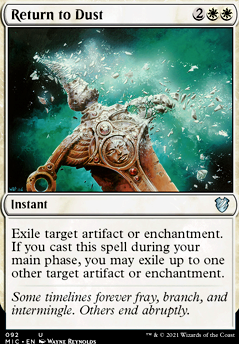 Assuming you are going for an aggro strategy some cards:

Some recursion cards to protect against an oncoming boardwipe:

If you are unsure about expensive cards you can always proxy them to test them out in the deck before committing to buying them. I'd also recommend using custom categories to sort the cards in the deck makes it easier to visualize the purpose of each card and how many similar cards you have for synergy.

Great minds think alike! I try to do the same thing in my list (https://tappedout.net/mtg-decks/maximum-jank-lureflankingbandtrampage/) except I use Captain Sisay as the general in order to grab things like Gabriel Angelfire , Odric, Master Tactician , and Nylea, God of the Hunt

@shadow63, No I specifically mean provoke found on cards like Deftblade Elite and Hunter Sliver . I know the effect has largely shifted to green for cards like Prized Unicorn and Turntimber Basilisk , but I want to see provoke return on some non-green cards as the effect hasnât been completely scrubbed off of white and red cards such as Odric, Master Tactician and Impetuous Devils . Provoke also has this cool rules interaction when itâs put on a creature with Menace. If a creature with provoke and menace provokes a creature an opponent controls one of two things happens depending on their boardstate. If the opponent only has one creature to block with, that being the provoked creature, the creature doesnât block the creature with provoke and menace but instead loses the ability to block for the turn. If the opponent has two or more creatures that can block the opponent must block the creature with menace and provoke with their provoked creature along with another creature of the opponentâs choice. I love how this interaction works out and Iâd love to see a creature or even an equipment that lists provoke and menace on the same card. I have this custom card dedicated to the idea actually, itâs a 0/1 artifact creature with menace, provoke and the text line, âAs long as this creatureâs power is 0 it has indestructible.â And if that last effect makes it too strong I could put some drawback on top of all that like giving it prowess or some line of text that boosts itâs power off of something an opponent does just to make it vulnerable to removal/combat. I like the concept of provoke so much that I use Deftblade Elite and Infiltration Lens in one of my commander decks as a draw engine and Iâd love to see a new/better creature to replace the deftblade, preferably one with menace or haste along with its protection ability, but at this point I think Iâm making too specific of a wish to have happen. Regardless I seriously want to see provoke get a shoutout in some creative way in Modern Horizons 2, or at the very least give me some cooler art by reprinting Deftblade Elite in the set!