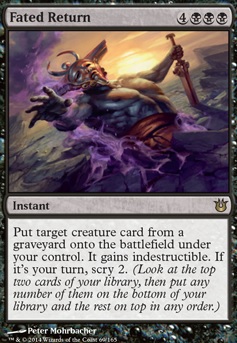 Put target creature card from a graveyard onto the battlefield under your control. It gains indestructible. If it's your turn, scry 2. (Look at the top two cards of your library, then put any number of them on the bottom of your library and the rest on top in any order.)

Fated Return occurrence in decks from the last year 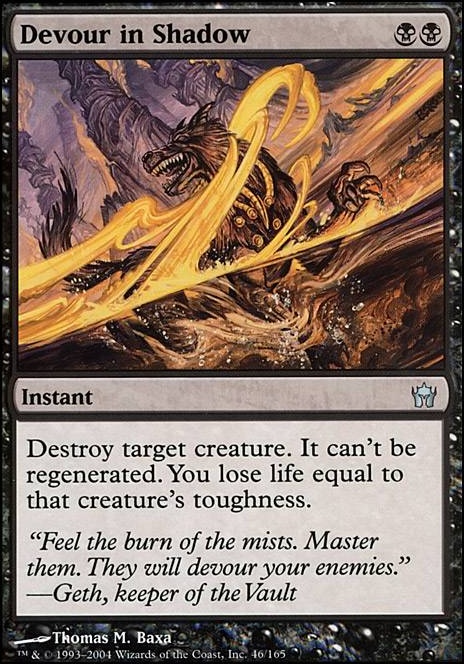 Anything you can do I can do better
by Hydrocynical

A friend of mine who runs Horobi uses Fated Return as a way to give Horobi indestructible. He very quickly becomes a target as people don't want their stuff getting targeted and Return is the only way I know of to give indestructible without targeting first.

PhotogenicParasympathetic thank you for the comment! I've had a lot of fun with the list up until recently now that my playgroup has become more competitive. I've been thinking about adopting more storm and reanimation lines to accommodate for the recent increase in competitive level. Lately I've been playing a lot of Tasigur Control however.

Fated Return has pulled off some stupid shenanigans. Since it's instant you can kill someone's Vorinclex for example and then follow it up by paying seven mana to reanimate it and make it indestructible under your control. Mana intensive yes, but in more casual metas I've been able to pull off that sort of jank. Toshiro is a good enabler to essentially flash it back right after a kill spell too. Not for all metas, but for the one I played this deck in at the time the slot was warranted.

I've been wanting to slot in Grip of Desolation for some time. I've just struggled to figure out what kill spells are worth cutting because I can't seem to figure out what's been too subpar to justify putting on the chopping block. I get anxiety just thinking about revisions.

Thrilling Encore was thrown in here when I saw it spoiled. I have a copy, but I haven't actually gotten a chance to test it unfortunately. I thought it might be decent to bring in if I were to adopt more reanimation lines, but I'm not sure how to reconstruct the deck in a modular way that incorporates such ideas.

My collection has expanded tremendously since I created this deck, so I have more mono black staples like Yawgmoth's Will , Vampiric Tutor , and Demonic Tutor . I'd like to make this list more competitive but I'm not sure where to start. Some degeneracy with Isochron Scepter , Paradox Engine , and Aetherflux Reservoir seems decent. I feel like with enough mana and Toshi triggers I might be able to storm off with him alone but I'm not entirely sure how viable that would end up being. Every time I've tried, his ability just feels too limited to bring to the competitive level. He's such a cool commander though, and I wish I could improve him more. I just don't have much of a reason to throw more money at him at the moment. It's honestly a shame too. I love him with all my heart, but my playgroup doesn't allow him to do what he wants to do anymore.

First off, thanks a bunch for the mention in your description! I'm glad you found my primer helpful, and I'm glad you enjoyed a Toshiro build as well! I'm sorry to hear you've retired it for the moment, although I can certainly understand that - while a lot of fun, Toshiro is not highly competitive by any means.

Quick question: How did you find Fated Return to work for you? I've not yet tested it because it seems so mana expensive but... that's also a really powerful effect. Did you find it useful/worth the cost, or did it tend to sit in hand unused more often?

Also, if/when you do revitalize the deck: I've tried out a few cards in your maybeboard since I first wrote the primer, and Grip of Desolation has been phenomenal. Getting to remove opposing problem lands is reward enough, but having it also act as devoid removal to get around things like Iona and Akroma has been excellent. Thrilling Encore ... less so. I never felt like a large enough group of creatures was dying at the same time due to my own kill spells, and since the card costs 5 mana, I was frequently having to kill fewer creatures than I wanted to in order to fire it off. I could also wait for an opponent to board wipe, but that was less reliable to happen. I tested it, but ended up cutting it after it underperformed.

Thanks for the tips! You're making me very tempted to pick up some additional upgrades... If only I had the funds!

Thanks for your suggestions! First of all, I'd like to mention that your comment prompted me to update my deck's intro! That said...

I've never heard of Fated Return , Soul of New Phyrexia , or Hammer of Purphoros . I think I will pick up a copy of them, especially since they're so affordable! Will need to think of what to cut, however.

You're right, Bring to Light was an artifact of my The Ur-Dragon Deck before it evolved into a Scion of the Ur-Dragon deck. I've been able to play this deck <5 times, and Bring to Light has come in clutch once where I used it to tutor for a Curiosity that closed out a game. It really is just a financially cheap (and mana-expensive) tutor though, and I would be happy to replace it with a Demonic Tutor if I could afford one. While I don't have enough games to say with certainty, I am hoping that Bring to Light has the potential to be slightly more useful flexible as a means of indirectly stockpiling mana before a combo-turn.

I recently added the combo cards you mentioned, but I haven't played enough games to comment on their consistency (this deck is slightly too expensive for my playgroup at the moment). If they end up being too clunky or situational then... you're right: I should cut them. Is that how they performed in your experience?

I haven't considered Niv-Mizzet, Parun , but it does look interesting. It looks like it would serve the same purpose as Niv-Mizzet, the Firemind , however, and the deck seems packed as is. Do you have any strong opinions on the matter?

I am considering cutting Ojutai, Soul of Winter and Scalelord Reckoner , because I haven't really gotten much use out of them so far. What do you think about those cuts?

Not quite sure what your budget is, but a reanimation package usually works well in a Scion of the Ur-Dragon deck. I always liked Fated Return for instant speed tricks or indestructible.

Speaking of indestructible Soul of New Phyrexia is a good card to make sure your board of scary dragons doesn't get wrath'ed away.

Another option to give you haste is Hammer of Purphoros

Mana rocks are good, drawing cards is good. I think the Dragon's Hoard should be in this to solve both issues.

I'm intrigued by Bring to Light in this deck. I guess it is a cheap tutor, but is seems limited. I would love you hear how you use it.

There are some fun combos pieces that work with different dragons Bear Umbra , Curiosity (are you planning to add Niv-Mizzet, Parun ?), and Tainted Strike ; are you able to get them to work that often? If not, they may be the cards to cut.