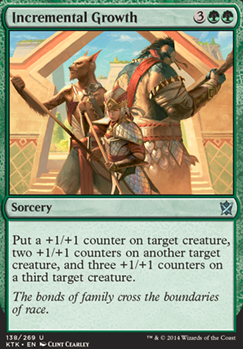 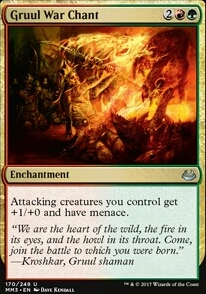 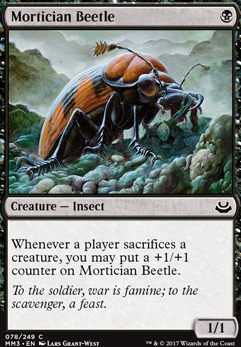 Okay so the main problem here seems to be focus. Yeah your curve is bad, but usaDiabetic said enough about that. Imma talk about cards. Also I'm linking my deck at the bottom of this comment because it's very similar. Borrow what you will.

There are a lot of cards in this brew that I looked at and just thought 'what are you doing here'. Whether they didn't fit the theme or were just outright bad, these are some cuts I might suggest for taking USA's and my advice into account.

Crystalline Crawler. It feels kind of useless. Like, what is it there to do? It's either a subpar mana rock or a weak attacker/blocker.

Guardian of the Gateless doesn't interact with +1/+1 counters, is 5 mana, and really isn't great in general. Either you block a bunch of stuff and it dies or you just use it as 2 blockers, and there are much better things to do with 5 mana.

Majestic Myriarch, while powerful, is not a card for this deck. Once again there is the lack of interaction with counters and also it's just a big dumb creature with a lot of keywords. At 5 mana? Not worth it.

Noosegraf Mob will die far too quickly for any counters to be placed on him. In commander I'm casting 5 spells every turn by the time you're casting this guy.

Reflector Mage, while a good card in general, has no place in this deck. Once again, why is it here?

The same is true for Reveillark.

And for Vizier of the Menagerie.

And for Nissa, Steward of Elements.

And for Haunted Cloak, Inspiring Statuary, Panharmonicon, Paradox Engine, Approach of the Second Sun, Migratory Route, Nissa's Pilgrimage, Spitting Image, As Foretold, and Ancient Excavation. All of these are good cards, some really good, but their are other decks that could utilize them better. They're just goodstuff in this deck, where elsewhere they could really be something!

Incremental Growth nay not be worth it for 5 mana. There are much better plays for that cost.

If you want board wipes for creatures I would suggest Wrath of God and/or Divine Reckoning rather than Sublime Exhalation?

And once again, after you put in some ramp, I have a ton of suggestions for replacing suboptimal cards here. If you'd like me to go into more detail on specific all-stars I will. If I came off as really harsh I'm sorry, this actually looks like one of the first commander decks I ever built myself so I felt like I had to comment, for nostalia's sake. Thanks for bearing with me through this behemoth of a comment, and happy brewing.

Some possible cards for you: Karametra's Acolyte

I was about to comment that you look short on lands then I realized youâre actually just short on cards in general. In case youâre new to Commander/EDH (if thatâs the case welcome, I hope you enjoy your stay in the best format in MTG) usually for lands in an EDH deck you want somewhere between 35-39, depending on the deck. I usually start with 37 or 38 and take some out or add some in as I feel like I need them.

Quick disclaimer: I havenât ever played with an Experiment Kraj deck so Iâm not likely to be super helpful but Iâll do what I can. I would recommend going around this website some more and/or EDHrec to find some ideas. EDHrec in particular has been invaluable for me in the past, I would really recommend checking it out.

Incremental Growth could be great here as a way to spread counters around and get Kraj access to some more abilities.

Morphling and AEtherling could also be amazing, as they both could get Kraj some protection once he gets their abilities and they have a wide range of other abilities which could prove useful.

Asceticism, while it may be a bit expensive, is very nice as a way to protect Kraj and all of the creatures that have counters on them.

Oran-Rief, the Vastwood is another way you could get counters on things.

Hadana's Climb  Flip is yet another way you can spread counters around, and while itâs flip side may not always be super useful here its front side definitely would be.

Pretty much all green decks in EDH should have Cultivate and Kodama's Reach, as well as Rampant Growth or whatever other ramp spell tickles your fancy.

You may want Commander's Sphere as a replacement for Simic Cluestone (or you could just put it in too if you want) since it is effectively a direct upgrade.

A land all non-mono color EDH decks should have is Command Tower. Itâs an always untapped dual land that doesnât cost thousands of dollars and should be in pretty much all decks that have more than one color.

Murkfiend Liege (and Seedborn Muse if youâre willing to spend a little more, although itâs definitely worth it for untapping lands) could be pretty nice as well, as untapping Kraj on everyone elseâs turn could be devastating.

I hope some of these ideas helped you. Even if they didnât I would still recommend checking out EDHrec, it is incredibly helpful and a great resource. Good luck with your deck!

WE ARE HEROES TONIGHT!!!! Dimir Heroic

I would recommend cards like Centaur Battlemaster and Staunch-Hearted Warrior plus some buff cards like Dragonscale Boon or Incremental Growth. Basically, you should add green

Just in case, if you don't have counters on everybody, as a last resort, try Oath of Ajani and Incremental Growth. To make up for less land, you can add Rishkar, Peema Renegade as it works quite well for your deck(I think).

Gidgetimer on Do I get infinite tokens â¦

The bolding in Pieguy's reply is not drawing attention to the important part of the card. Cackling Counterpart can only target one creature and therefore will only ever target Ink-Treader Nephilim if it does target him. The "if that spell only targets..." clause is so that you don't copy things with multiple targets like Incremental Growth.

The reason you will not get infinite copies of spells when you have two copies of Ink-Treader Nephilim out, be that tokens or if you just played two of them, is the part that specifies "Whenever a player casts..." You do not cast the copies, they are simply created on the stack. You only cast a copy if the thing making the copy specifically uses the word "cast".