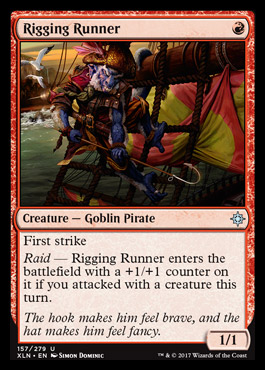 Raid - Rigging Runner enters the battlefield with a +1/+1 counter on it if you attacked with a creature this turn. 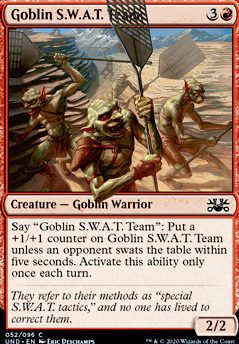 I have a couple suggestions- but these are mainly for the current meta, not a game store or an LGS where different decks might be better.

I would remove the Unclaimed Territorys because you need colored mana early game for both pushes and seizes.

I would put in a couple Mutavault just because it is a great card in tribal decks and sweeper protection. The downside of it producing neither red nor black can be mitigated by playing more urborgs, which brings me to the next point.

Probably 3 or 4 Urborg, Tomb of Yawgmoth. It by itself is a swamp, and the downside of it being legendary is not a huge deal if you only play 3 anyway. This is also necessary when playing with Mutavault

I would recommend taking out Rigging Runner entirely for more Metallic Mimic s, because while playing rigging runner or t2 after a swing is unlikely(but Iâm not mathematician) because you only play 4 other one drops.

Instead of Rending Volley, Fry would be better because it can also hit walkers. Take out rending volley

Leyline of the Void would also help out in lots of matches like soultai delirium and lotus breach. Take out the glint horns

Pithing Needle almost a strictly better Phyrexian Revoker because it gets hit by less removal. Take out the revokers

Also- although you would have to take out some of the best cards in your deck, Lurrus of the Dream-Den could really help out against removal and sweepers.

Ok. You were right. My land list wouldn't work on your deck. Captain Lannery Storm don't create many treasure tokens...
Though you always have the mana color you want with your land list, you hardly never can play your spells on the right turn. I mean: a 1-drop on turn 1, a 2-drop on turn 2, to cast 2 cards of 2 CMC on turn 4. For an aggro deck that's really important. Even if you use your bounce lands on basic lands and 2 damage untapped nonbasic lands, if you get 1 tapped land and 2 bounce lands you are screwed. You can't cast Rigging Runner on turn 1, also you can't cast it on turn 2 if the first land was Drowned Catacomb . And you won't be able to cast a 2-drop on turn 3 and a 3-drop on turn 4.
So my suggestion is:


See, all those lands enter untapped. You don't have blue noncreature spells. You only need blue mana untapped lands to cast those cheap blue creatures. From those 11 noncreature spells, only 7 of them can be cast before turn 5. Until turn 5 you've already found one of the 8 missing-mana land. Or cast it on turn 6 like on your land list, but using Unknown Shores . Unknown Shores get good on a deck with only untapped lands... On the worst cenario, starting with an opening hand with 2 Unknown Shores (you should mulligan) you still can cast Rigging Runner on turn 2 and Captain Lannery Storm on turn 3 after drawing one of the 12 red mana lands.

Hello, Wecros. I tried Grasping Scoundrel as another one-drop in this deck, but in my series of playtesting I find Rigging Runner better as a third one-drop given it has first strike (planning to put it back in the deck). As to Ruin Raider , I'm still considering its place in my deck given that I'm brewing this to become a fast aggro deck and I'm finding it to be quite a bit slow. Regarding Skewer the Critics , it's been working so far for me since my primary removal comes in the form of Cast Down , Dire Fleet Poisoner , and Ravenous Chupacabra so it doesn't really matter if it's a sorcery (I just love me some burn just in case). Thus I think Skewer works for my deck, and even if it's not instant speed, its spectacle cost appeals to me.