Unknown Shores occurrence in decks from the last year

Kitties and Doggos
by CrossbredLemon 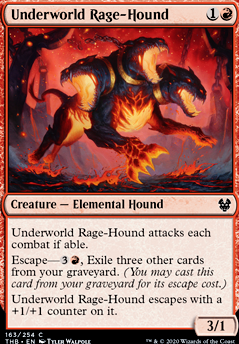 Why are all of your lands only able to produce colorless mana? If you're only making colored mana via Unknown Shores and friends, you're basically paying double the mana cost, and you can't play Arboreal Grazer on turn 1. Moreover, you're spending 8 slots on Chromatic Lantern/Dryad of the Ilysian Groves just to make your deck FUNCTION, which you could do naturally with a better land base. Most of your big splashy wincons can't be accelerated by Jegantha at all (if Jodah's not out), since they're completely colorless in cost, and other things like Medomai the Ageless or Springmantle Cleric or Chamber Sentry are very disappointing payoffs. Also, Chromanticore can't be cast for its bestow cost off of Jodah, I'm not sure if you know that. Perhaps Zacama, Primal Calamity over one of them?

I'd start by revamping your mana base, and adding at least a bunch of Forests. I'd rather run multiple copies of a good payoff, rather than one copy each of a bunch of bad ones. I'd run more interaction to protect Jodah, such as a full 4 Heroic Interventions and perhaps Lazotep Plating. Finally, I'd try to see if there's any good tutors that fit your color restrictions so that you can find Jodah more easily, since it seems like this deck won't work at all without him.

Arcane Signet has been reprinted in Commander Legends, it could replace any one of the Diamonds or Mind Stone. Path of Ancestry is a good tribal land even though it always ETB tapped; the repeatable scry by casting a Pirate is worth it. Unclaimed Territory is another budget tribal land. These two lands could replace Shimmering Grotto and Unknown Shores.

If you're willing to spend a little more for lands than Training Center from Commander Legends and Riverglide Pathway Â Flip from Zendikar Rising are more Izzet lands. They could replace Terramorphic Expanse and Evolving Wilds.

Scallywallwest - Ikoria trimoees are definetly a good idea, I gotta make some changes for them! :) I'm not a fan of lands like Unknown Shores, so I'll pass on that.
I think I'll also add Molten Echoes, which could be pretty sweet for Slivers aswell. :D

Hey! Nice deck! I think you could improve the mana base by adding in the Ikoria triomes, which can also draw you a card if you don't need the extra mana. Maybe toss in an Unknown Shores. If you're not on a budget, I'd toss in some tutors, just to improve consistency. I love that you've completely kept to slivers, and have support for them, too.

Actually, looking at your land base, you can probably drop down to about 36 land since you're running green. Gateway Plaza, Rupture Spire and Transguild Promenade are not great lands. Mage-Ring Network will probably also not work to desired effect. I would suggest instead Shimmering Grotto or Unknown Shores, Selesnya Sanctuary, Rogue's Passage and/or Blossoming Sands.

The reprint of Unknown Shores annoys me greatly; could WotC really not have reprinted either Mana Confluence or Reflecting Pool , to help keep the prices of those lands lower?