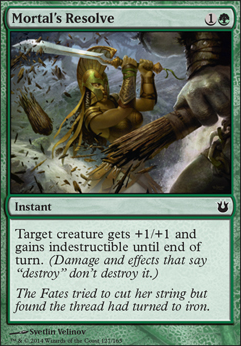 Target creature gets +1/+1 and gains indestructible until end of turn. (Damage and effects that say "destroy" don't destroy it.) 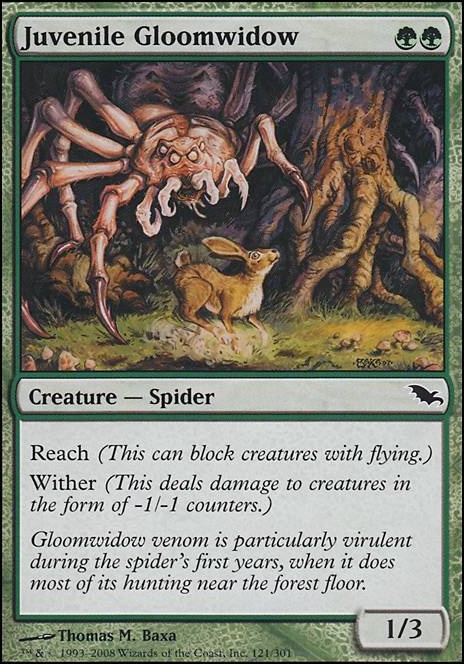 Thrun, The Last Troll
by Enlusmc

Also liking the combo of Mortal's Resolve for 1 Gargos Trigger, also making it indestructible to kill off any deathtouch threats, then hit it with Bounty of Might .

It may be a sorcery speed combo, but it'll remove 4 threats pre-combat and make Gargos huge for turn and an attack phase.

Deathtouch is a nice thing to put on anything fighting Gorgon Flail , Gorgon's Head , Quietus Spike

same with Indestructible Darksteel Plate , Inspiring Call , Mortal's Resolve , That Which Was Taken

A creature like Rot Wolf might be good as a recurring source of draw -- Just pump it up and they either get poisoned or you draw a card from them blocking it. That's the big pick I'd suggest, as it's a threat, can draw cards and infect, while oppressive, can win you the game easily.

I see you have Ranger's Guile -- I always love Sheltering Word in decks with big green creatures along with that. Withstand Death and Mortal's Resolve give indestructible as opposed to hexproof if you need it.

If you're looking to ramp quickly, you might want to consider land auras that get you a little extra like Fertile Ground or Wild Growth -- Sadly the ones that draw you cards only seem to let you get mana of any colour which is sort of useless in mono-G. Bequeathal might be an idea in the early game, pop it on a chump blocker and get some draw.

Aura Gnarlid and creatures like Wandering Wolf might be an idea -- If you can pump those up, they're virtually unblockable. Silhana Ledgewalker comes with hexproof too as well as pseudo-unblockable.

Only other thing I could say is to mark Mowu with CMDR in the list so it stands out -- I'm really liking the build otherwise, and as you say at this rarity level it's hard to find good sources of draw, but with some testing and tuning I'm sure it'll be a strong deck to fight against! +1 for good boyes!