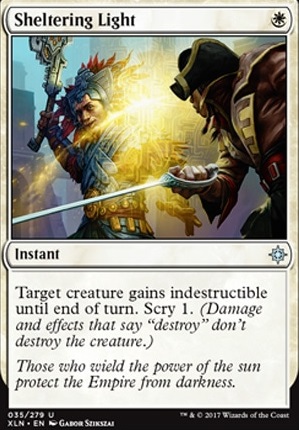 WHO GOT BLOOD ON MY PAPERWORK?! â¡
by tiffanyann

Protect the Sunforged Lore from Fire
by TheBastardLord

Thundering Rebuke deals 4 damage, triggers Arcbond ; 4 damage to each creature and each player, triggering both Boros Reckoner for 4 damage to any target, and Deflecting Palm to deal 4 damage to the controller of the Arcbonded creature.

It sounds very convoluted, but I think you're right '^^

If you can make your Boros Reckoner indestructible (with Sheltering Light for example), then cast Arcbond on it, then deal it damage with Thundering Rebuke , because the Reckoner says "any target", you could repeatedly target itself with its trigger, and Arcbond will trigger over and over again, dealing 4 damage to the whole board and each player repeatedly, until you've had enough. If you also have a Brash Taunter in play, the opponent will die before you would.

9-lives on Indestructible and Arcbond and damage â¦

Would this work? Infinite Combo of any creature, especially Soulfire Grand Master with Sheltering Light , Gideon's Sacrifice , and Arcbond ?

If it's true, then it deals infinite damage and gives me infinite health? And say that I attack a indestructible creature with it. Would that still give me infinite life? Or does the damage have to resolve as to actually harm the indestructible player/creature?

Your mana curve is so low that you don't need that much land (or ramp even really). Try swapping out a couple lands (and maybe a signet) for the following: Mentor of the Meek, Abzan Beastmaster, Sylvan Reclamation

Bring your price down, consider some cheap, instant-speed protection for your commander! You're drawing a billion cards anyway, you'll always have the mana to spare and probably will draw into at least one when you need it. I'm thinking of cards like: Blossoming Defense, Simic Charm, Mizzium Skin, Sheltering Light, Gods Willing, Valorous Stance

HalbrechtHalbrecht Sheltering Light out and Quiet Contemplation is in!

you and me and the end of the fucking world!!!

Gods Willing is just better then Sheltering Light. I gives the same protection, you get the scry but it also can be used as evasion. If they only have a certain color creature.