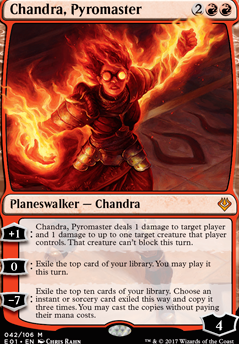 0: Exile the top card of your library. You may play it this turn.

-7: Exile the top ten cards of your library. Choose an instant or sorcery card exiled this way and copy it three times. You may cast the copies without paying their mana costs. 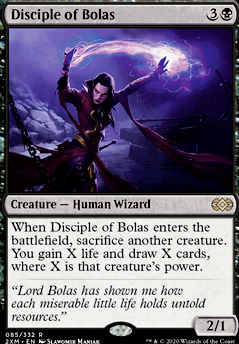 Oooh! A Treasure!
by 2010SailorMoon

I am sorry, but I dont have the Chandra, Pyromaster. I do still have the other three you asked about though, would you do my: Dragonlord Silumgar, Dreadbore, Rakdos, Lord of Riots

for your: Lotus Petal and Leyline of Anticipation?

I am sorry for the late response, but the answers thus far have been incorrect. If it is too late anyway, I apologise and moderators may take appropriate actions. It showed up on my Google scouring of Mizzix's Mastery and I didn't want to leave the thread without the proper answer.

Look at the last ruling of Kalamax, the Stormsire , concerning copying cards and not spells. It mentions God-Eternal Kefnet , but it also pertains to Chandra, Pyromaster and Mizzix's Mastery , for instance.

So to summarise: no counters and no extra copies of anything, no infinite shenanigans.

Hope it cleared something up, and again - sorry for the late answer. Please do not hesitate in taking the proper action if I am too late, Mr Moderator, sir. (But if I am too late, do consider automatically locking threads rather than punishing those, who like me, found it through Google)

Ah, I have a few more notes to the changes.

I've playtested the deck a couple of times, and it feels much better than afore. Nice!

So, Field of the Dead is best used with fewer basics, as that provides fewer shared names across the land-base and thus making its zombies spawn reliably. Brains ahoy.

For this time, or until the mana-base reaches a point in which it may use the Field, a Mikokoro or Geier Reach is probably better. Perhaps just a Forest.

Now for another field as subject. Field of Ruin is helpful, for removing lands is necessary in any deck, but it ramps all players, including the ones not involved in this interaction. Strip Mine is expensive, as with Wasteland, but a Tectonic Edge would be better.

Rampant Growth? Where art thou, Growth?

The last thing I would recommend is some more card draw. The deck ramps really well and Radha is a fine outlet for said mana, but a few cantrips or draw engines would be great. You can probably cut a land or two, but I wouldn't go much further than that. Outpost Siege is a reliable one.

king-saproling I appreciate your feed back. I ended up throwing a Chandra, Pyromaster in her deck Tokens, Buffs, and Burn Oh My. I'll be sure to check out the article you wrote as well!!

Hi Abraxas3719 thank you, I'm glad you like it! Tana & Bruse are a deceptively powerful pair, and for a Naya deck it is surprisingly versatile. It's so cool that you're building a deck for your daughter! Assemble the Legion would fit right in a deck like this one, and there are plenty of Chandras that would fit nicely: Chandra, Acolyte of Flame, Chandra, Torch of Defiance, Chandra, Fire Artisan, Chandra, Pyromaster.

I actually wrote an article on how to style deck pages, you can check it out here