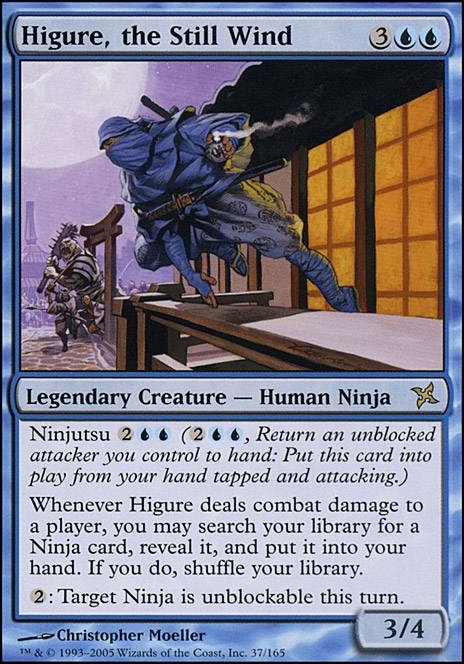 "Why not just make a Yuriko deck?" they all say. Aside from Higure being from the original set of betrayers ninjas, and having art so beautiful that you want to see it every game, there are some notable strengths to Higure worth building a deck around. The idea with this deck is to take advantage of ninjitsu in various ways:

Higure is inferior to Yuriko in most ways, but his ability to tutor out ninjas means we can get to them every game. He becomes something of a means to Sakashima's Student, who can often swing for big, unblocked damage.

We can protect our abundance of little creatures and ninjas with Kira, Great Glass-Spinner and Teferi's Veil. also, don't be afraid to return ninja to our hand with Unsummon and the like, as it often is just as good to have them in our hand as on the battlefield.

Current dilemma with the deck is that I don't know whether Maskwood Nexus is worthwhile to run just to enhance Higure's tutoring, and I'm having some issues knowing whether to speed up the mana curve tor just keep it streamlined. Yuriko decks tend not to play many mana rocks, but this deck wants more mana, especially in multiplayer.

Other question: is it worth it to play anthems like Hall of Triumph ? I do typically want to win with combat damage. I would prefer anthem effects to be on creatures, so that I can have a critical mass of creatures to interact with ninjutsu and whatnot, but my creature types are spread out so I can't use Merfolk Sovereign for example. Anyways, any clever ways to dial up damage in mono blue are appreciated.

I built Yuriko since I knew you wouldn't, Major