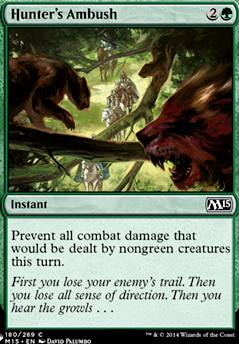 Prevent all combat damage that would be dealt by nongreen creatures this turn.

Your deck looks great for the first try.

I was suggested your deck under my favorite deck, which uses the same commander. Had Ghalta, Primal Hungeras Commander first, but then switched to Nylea, Keen-Eyed because Ghalta was to OP ;-) Also had Nylea, God of the Hunt like you, but i don't need "Other creatures you control have trample."

What do you want to do with your deck, I did not realize.

You have some mechanics:

If all goes well your deck is strong, but what do you do when you play against a deck that destroys/enchants the 2-3 key cards? I would add the:

You say you've been playing for only a month? Makes me wonder how you got such a strong deck together, respectfully.

What helped me a lot was to make the listing personal.

Fun! I think it'd be nice if you had some way of buffing those bears, though. Not necessarily Adaptive Automaton like most people choose, because whether or not it's a bear is debatable - but perhaps Door of Destinies or Obelisk of Urd or Vanquisher's Banner (though, wow, not a single one of those is under two dollars right now).

I'd also say that Hunter's Ambush costs too much mana to be worth it, for a card with cats in the art. Something like Terrifying Presence might be nice if you're trying to avoid just running Fog, because bears are quite terrifying.

And finally, an important question - which version of Werebear are you running? The new art is lovely, but I think a deck like this will greatly benefit from the original printing's right to bear arms.

First with regards to your commander here are a few cards that pair nicely:

Predator, Flagship: bounce their creature into the air and shoot it down with Arashi

I'm going to mention some categories of cards i think you are missing or need more of and why they are important.

Card draw: EDH games tend to go on a lot longer than other formats. This means that you will soon run out gas in hand and be reliant on topdecks. This is where card advantage comes in. Cards that allow you to draw more than 1 card are good ways to restock your hand. Within green a lot of your draw power is creature based Soul of the Harvest, Elemental Bond, Shamanic Revelation etc.

Board wipes: Sometimes the game gets out of hand and you just need a reset button to take care of the scary things your opponents are doing. I usually like 2-3 in my decks. Within mono green you are pretty limited but alteast you have things like Nevinyrral's Disk and Boompile

Creature removal: In almost every edh game you play, your opponents are going to cast creatures you need to get off the board, and fast. You don't want to have to nuke the board every time you want to kill something without flying. Duplicant, Song of the Dryads, Beast Within are all good options

Here are some other misc good cards to consider: Caged Sun, Mana Reflection

I'd also consider more in the way of either creature or artifact based ramp. Hedron Archive, Dreamstone Hedron Greenweaver Druid etc.

I think you are also running a few fog effects like Druid's Deliverance, Defend the Hearth and Hunter's Ambush. These effects often are not worth it. If the reason you need to cast it is because you are getting beaten down by creatures, you would much rather draw an answer to that, then draw a card that buys you a turn find an answer. I dislike the Feed the Clan here for a similar reason

Hope that helps. If you want I can look at your lazzav list too.

I think the Dynavolt Towers and Wildest Dreams could replace the Hunter's Ambush and Vine Snares in the MD. Maybe 1-2 PW's could come in place of a few Authority of the Consuls too. You know I love me some turbo-fog! The only thing that would make this list better would be if Maze's End was legal in this format lol.

Creatures? I think not

First of all, a commander deck must have exactly 100 cards (including your commander), and you have 106

I suggest you remove some lands, as that takes up almost 50% of your deck

Now, if I were to build a Mazirek deck, I would definitely go with a heavy token strategy, as tokens are relatively easy to produce (especially in Golgari), expendable, and given enough time and resources, can easily win you the game.

So, with that in mind, I suggest you remove these:

Since you only have two creatures with defender, I might recommend replacing Axebane Guardian with Magus of the Library, Drumhunter, or Circle of Elders, since you seem to be running Humans in this deck. If you don't mind including other creature types, maybe try Llanowar Elves/Elvish Mystic or Llanowar Mentor?

I don't see too many creature token cards in this deck, so maybe replace Druid's Deliverance with one of Fog, Serene Sunset, Winds of Qal Sisma, Hunter's Ambush, or Terrifying Presence.

Sword of the Chosen is pretty sweet, but if you want to boost your other creatures at instant speed, you could maybe use something like Thriss, Nantuko Primus or Gigantomancer.

No Nissa Revane ? She is quite good to give you life and if you manage to get her last ability, it can be an end for your opponent(s) (just be careful, a Wrath of God or Damnation as it happen so fast in commander...).If giving a pet to Rhys doesn't bother you, give a look at Wirewood Symbiote as a full board savior in case of mass kill.Elvish Vanguard can be a real threat to your opponent too...Flavorful and really good if your playgroup doesn't play green, Hunter's AmbushMaybe you want to play like blue players, during other player's turns ? Here come Yeva, Nature's Herald :)Oh and sometimes, heroes fall... as a black elf player, using a Victimize on a token which really want to help can be usefull.And for last... Bow of Nylea ! It does stuff but mostly, it sends a little arrow of fear on each of your attack step