Each player shuffles his or her hand and graveyard into his or her library, then draws seven cards. If it's your turn, end the turn. (Exile all spells and abilities on the stack, including this card. Discard down to your maximum hand size. Damage wears off, and "this turn" and "until end of turn" effects end.)

Day's Undoing occurrence in decks from the last year 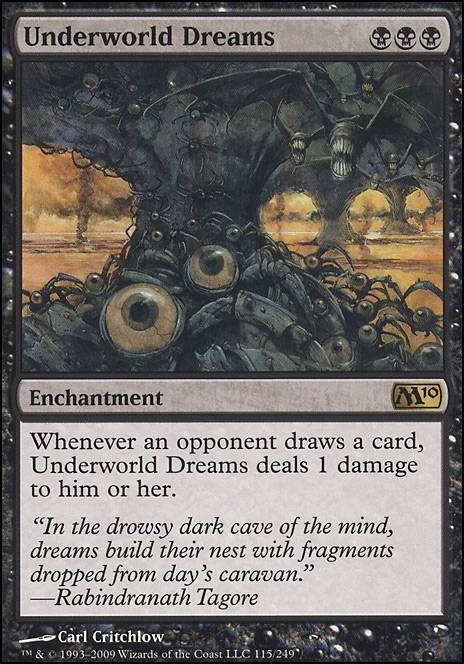 Draw or Win? - Nekusar
by Cutler

I don't think Teferi is legal here. But I think you should play every wheel effect you can get your hands on. Wheel of Fortune and Windfall for sure. Day's Undoing would be as good since ending the turn doesn't matter if opponents are losing on the spot to it. Howling Mine , Underworld Dreams and all their clones do very well for me. You're playing Islands so Cyclonic Rift belongs. I also like Evacuation if you don't kind resetting your board as well. Just the first couple of ideas that came to mind.

Ninjew42, This deck is about assembling our one shot kill combo (Traumatize and Fraying Sanity). Day's Undoing is great at getting us this combo encase of discard or bad draws. I wouldn't play tome scour or mindscupt because I would much rather assemble my combo than insignificantly mill the opponent.

Why Day's Undoing? Seems counter productive. Why not Tome Scour or Mind Sculpt? Wall of Lost Thoughts should replace Wall of Runes too.

PorterRobinson There's really no such thing as replacements for those cards, unfortunately. Day's Undoing is the closest thing effect and cmc wise to Timetwister, but ending your turn immediately is a significant downside.

Land wise, you could look at Blood Crypt/Luxury Suite/Sulfurous Springs for Badlands, as well as Shivan Reef for Volcanic Island. The BFZ lands or the Shadow lands could be used in a pinch as well I suppose, since they are fetchable but come with conditions to enter untapped (and don't come in U/R combinations).

As for replacing Imperial Seal, you could look at Cruel Tutor or Wishclaw Talisman.