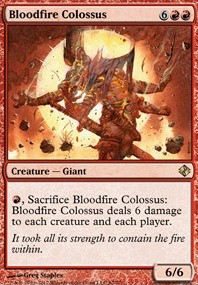 I Can Ninjitsu Too!
by PuffMagicDragon

I'd love Phyrexian Altar for a handful of my decks but the high price point has kept me from getting one. Hopefully it gets a reprint sometime soon. Su-Chi is on the Reserved List, so the price for that one will probably never come down. Cathodion is as close as we will probably get to it. Ashnod's Altar is a card that I should have a handful of, but have somehow never gotten. Might need to fix that sometime soon because it's a great card.

Bloodfire Colossus is pretty similar in effect to Ryusei, the Falling Star. Ryusei's effect is slightly cheaper, though, as it doesn't require an activation cost and just has to die. Leyline Tyrant, Altar of Dementia and Impulsive Pilferer are also great, but all of mine are in other decks at the moment.

I'm not terribly interested in infinite/game-winning combos as a whole, so I'll have to pass on Thornbite Staff related stuff.

Great list! I don't have time now to elaborate all the thoughts I have these suggestions, but maybe just take a look. I'll try to elaborate later:

CaptainToll on What's Your Favorite Deck?

Purphoros, Bronze-Blooded. Man he embodies big red so damn well for me. It is so satisfying pumping out the big guys, that often don't see play due to their cmc. Bloodfire Colossus, Knollspine Dragon to draw obscene amounts (note you can cheat him into play anytime someone got whooped, not only when you did the whooping), Drakuseth, Maw of Flames and Dragon Mage, which becomes a Wheel of Fortune, that also did five to someone. And my absolute favorite interaction: turn 5 drop Purphoros, Bronze-Blooded, turn 6 drop the damn Fiery Emancipation (one devotion from early turns is not to much of magical christmas land) and then deliver some heavenly Smackdown to the poor soul not having blockers. Such a strong curve, makes people really anxious about a battlecruiser deck just deleting them. Add some ramp and you have a set straightforward gameplan if I have ever seen one.

Sort of. I have a couple of big damage chuckers, not to mention the ones every Purph player has:

And Bloodfire Colossus for a sort of instant speed board wipe.
Considering taking out my one piece of life-gain and just re-adding Bloodshot or putting back Warstorm Surge to double up on etb + burn effects...

Ok! Sweet build so far! Let me see if I can hell you out. I am a fan of the title by the way.

So Naturally, Feldonâs ability focuses on a few things. They are:

1) it triggers ETBs and graveyard abilties

Keeping these three things in mind I would suggest the following, some of which may not suit your play-style, but alas! This is why they are suggestions!

Creatures like Inferno Titan , Godo, Bandit Warlord (only useful if youâre running equipments), Bloodfire Colossus , and Zealous Conscripts have value in entering or dying. The new Ilharg, the Raze-Boar may be of semi-interest to you even though he doesnât have an ETB he is another tool that helps trigger ETBs like Feldon.

I think potentially the most key card you are missing is Sundial of the Infinite so you can keep the token copies that Feldon makes. Plus itâs an artifact you can try and recur since red can do that rather well. In regards to recursion I think you could mull over Goblin Welder and Scrap Mastery . They seen like they could work for you. Goblin Engineer from the soon to come out Modern horizons will be an auto-include for this deck too.

Krark-Clan Ironworks may be better for you than Phyrexian Altar . There would be no problems with running both but aince this deck is artifact heavy Iâd recommend the former over the latter.

There is also Umbral Mantle , Thousand-Year Elixir , and Sword of the Paruns to help untap Feldon.

Anyway, this is not to say you dont already have some awesome stuff going on already! If you want my opinion on what to take out for some new stuff let me know. Id be happy to help.

Did I Feel Naked Being Naked? Yeah. Totally.

I suppose only male creatures?

(else there are also Karmic Guide, Nirkana Revenant and maybe a few others)

That Tasigur, the Golden Fang isn't in-color is a shame.

Caging Bloodfire Colossus was very effective, but not at winning. Attempting to work in less burning myself in the face and more mana and card draw at the expense of reusing things and being able to answer things. Also attempting to have a touch more defensive presence to try and encourage people to stop hitting me in the face.

i appreciate your support and recommendation, unfortunately most of those cards would kill all my creatures as well, which is not exactly what i want to do. Bloodfire Colossus and Heartless Hidetsugu are pretty neat.