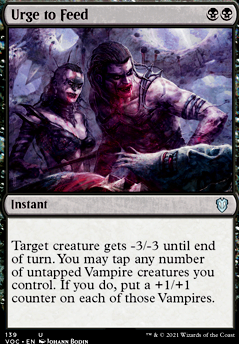 Target creature gets -3/-3 until end of turn. You may tap any number of untapped Vampire creatures you control. If you do, put a +1/+1 counter on each of those Vampires. 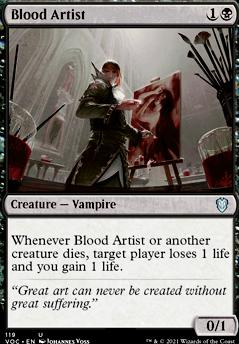 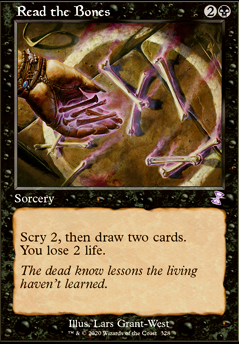 Like Surgical Extraction , Extirpate is a card that usually fares better in the sideboard. Without the assistance of Duress effects, you'll have to wait until you successfully destroy the offending card or hope that your opponent is running a graveyard strategy, and in matchups where your opponent has more of a singleton toolbox build, it may never do anything at all. I'd rather have more hard removal in the main to kill off any additional copies of enemy threats that do get played. For vampires, I always love the Zendikar one-two punch of Feast of Blood and Urge to Feed . Feast is the better card in most cases, especially if you're gonna play around Vito or any other Sanguine Bond effects. Urge is better in situations where you have plenty of small vampires that can capitalize on higher power through lifelink, evasion, and the like.

I use Urge to Feed as a pseudo-destroy in the Vampire Deck I built alongside a friend for a special Halloween competition a few years back (it's called Sorin's Lifelink Legions on my profile if you want to take a look).

This could be an alternative to not using Go for the Throat as you mention in the description; plus it's a counter on any number of creatures you want in a Vampire build which can be used very strategically; particularly if you have any Vampire token-generation (which I see a little of, maybe could add some more with Sorin, Lord of Innistrad or something).

Nice to see some of those other recommendations from your other deck make this list though! Very solid choices and I see a lot of similarities in our builds even though the theme is somewhat different.

I've found that Urge to Feed works remarkably well in my mono-black vampire deck. Not quite a full-on creature destroy but it'll take out pretty much any early-game target & is a good way to boost up your low mana-cost creatures.