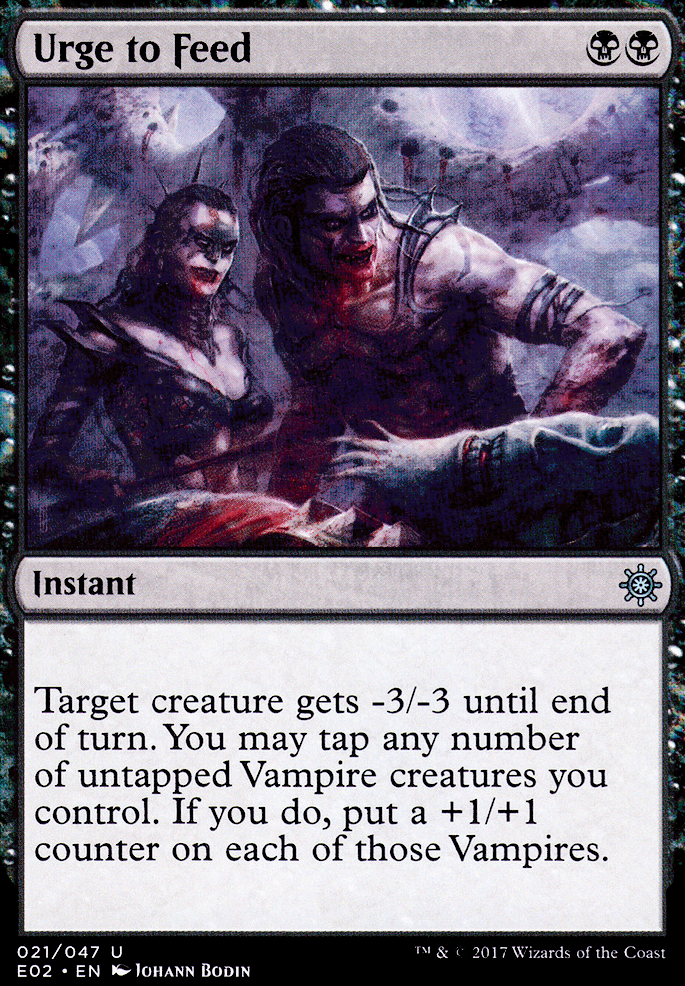 Target creature gets -3/-3 until end of turn. You may tap any number of untapped Vampire creatures you control. If you do, put a +1/+1 counter on each of those Vampires.

Marchesa, The Vampire Queen
by MarshCasualty 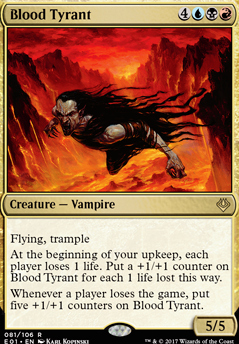 Great suggestion redben, Feast of Blood is a great inclusion. Urge to Feed however isn't a card I would put in. Tapping vampires for anything other than attacking is not ideal. I will add feast in when I get a copy of it.

Feast of Blood and/or Urge to Feed ?

Definitely, a side board is a big help at dealing with weakness inherent to the design of a deck, which in part depends on what kind of decks you run into regularly. You don't really need anti-graveyard cards if nobody exploits the graveyard, for example, they'd just be dead cards 99% of the time, but people going to tournaments had better be prepared for those things on turn 1 or 2 even in legacy. I think legacy is a great casual format, but it has some very fast win cons if you get too competitive.

1 very affordable and pretty nasty card for black is Duress ... this card can't deal with creatures, but most other stuff is a valid target, and nabbing their best card can be win you the game sometimes. It might be a bit mean for your environment though, so use caution.

Red and black can both do land destruction, and red can do artifact destruction, but if you never face any problematic artifacts or lands, then these cards might not be worth bothering with. Black has the best creature destruction generally, maybe something like Feast of Blood , or Urge to Feed to deal with indestructible weenies and pump your team.

If you give me an idea of what you think you are missing in the deck, I can make more suggestions.

The tribal base looks pretty nice, and I like the amount of 1x and 2x that you run. I might bump Vampire Nocturnus up to a 2x though.

Not a fan of Essence Extraction . Its spot removal that is expensive at 3 CMC, and doesn't guarantee removal. The extra life is certainly nice, but I would run more Fatal Push or Tragic Slip over them.

Chalice of Life  Flip is nice here, gives a colorless way to inflict a loss on opponents.

With the 2x Crypt of Agadeem and the 20 lands anyways, you could definitely fit 1 or 2 X spells in here for games that go longer. Torment of Hailfire is ridiculous.

A few draw pieces will help in case your creatures get hit by Wrath of God or some variant. I'm a real big fan of Mindblade Render , which isn't a vampire but worth a consider for a budget swinger/drawer. Asylum Visitor is less of a guarantee to draw, but its a 3/1 tribal creature with madness for 2 CMC so it might be worth a consider. Can help gas you when you're at no hand. Damnable Pact is an X spell that can refill you mid game at the cost of some life. Dusk Legion Zealot is a tribal that can replace itself, but doesn't beat down very well. Sign in Blood is a straight forward black draw card that can help you close out long games by acting as a shock too.

I think Dark Favor isn't that great, creature enchantments open you up to getting 2 for 1'd rather easily (they blow up or bounce your creature in response to the enchant, removing 2 of your cards with just 1 card).

I don't like Urge to Feed . It is mediocre removal, and the pumping of your tribe costs you an attack that turn.

Duress and similar effects as a 3x or 4x will help immensely. They let you deal with Enchantments and Artifacts, which are difficult for mono black to handle. They also let you get rid of board wipers, engine enablers, counterspells, and combo pieces before they are played. Finally, they reveal a lot of information about what your opponent can do, which helps you to make better decisions.

If this was my list, here's the changes I would make

In short, cull down to 8 pieces of creature removal. Up the amount of stealing vampire so serve as more removal and serve as a better tribal buff than blade of the chief. Add in hand disruption, add in Asylum visitors as cheap beaters who can help you if you're empty and benefits from opponents hand being empty too (from your Duress !). Move from the sac vampire to the guaranteed hits vampire because we don't want dead critters. Nocturnus gives all your vamps flying, so slightly upping total creature count while replacing 1x Nighthawk lets you get more benefits. Hope these suggestions make sense and are helpful!

Thank you Specterforge for all of those suggestions! Vampire Lacerator definitely isn't too hard for me to take out of the deck, and I can't believe I forgot Legion's Landing  Flip!! I am putting it at 2 just to see how that goes with the Legendary part of it but I think that or 3 is definitely where I want it. Also I don't really care about having no 1 drop vampires in the deck, so taking out Vampire Cutthroat seems fine, especially with that Urge to Feed removal being so-so sweet. 12 sources of removal, one having a lord-like effect, definitely seems fine for a midrange deck, at least to me. Especially when one of the lords encourages said removal! Definitely excited to try out this updated list in the next few weeks.

So first off. I love your deck! I make budget and kitchen table decks for people all the time and actually just recently started getting into competitive building (Memory Dissolution) and I love helping people with their deck. Now to my suggestions. You should cut out Vampire Lacerator . He really only hurts you unless you are already winning. I would put in 2-4 Legion's Landing  Flip in place. It enters and creates a 1/1 with lifelink that can flip and make more vampires with lifelink fueling your Cordial Vampire and Captivating Vampire engines as well as allow you to use any extra mana you have at the end of your opponents turn or just to dump mana into. This will also help in Grindy games by giving you a 1/1 with lifelink every turn (once flipped of course lol). Second is I would cut out Vampire Cutthroat . While his skulk ability is good, it becomes useless once you get any lords out. The lifelink is made up for with Legion's Landing  Flip I previously mentioned. In its place I would put in Urge to Feed . It's a possible removal and allows you to buff any and all vampires you currently control. Do it at the end of your opponents turn to possibly kill a creature and then buff every vampire you have with no drawback since they will untap. BONUS!! Create a 1/1 vampire with Legion's Landing  Flip, cast Urge to Feed targeting that vampire and trigger Cordial Vampire AND tap all your vampires for a total of 2 +1/+1 counters on all your vampires (on top of your lords!). Finally I would find where you could fit in Feast of Blood . Yes there's that condition where you need 2 vampires to cast it, but that's easy for this deck. This is a cheap catch all removal with the bonus of gaining 4 life. These suggestions would increase efficiency of the deck, make it so that you could interact with your opponent better and go to the long game if needed, and best of all: IT STAYS BUDGET! XD. Thanks for visiting my Ted talk lmao. (Also feel free to completely ignore my suggestions if you want lmao, and feel free to reach out to me if you want more suggestions or help with other/future decks!(And that goes to everyone who has made it this far lol))

Back in an old standard, I played some vampires using Blade of the Bloodchief and Bloodthrone Vampire to eat a bunch of saprolings, and get huge creatures.

These days, I think white is the color to make tokens. If you did, you would have access to vampire creature tokens with Call to the Feast , Elenda, the Dusk Rose , Queen's Commission and many others, also, cards like Stensia Banquet , Feast of Blood , Urge to Feed that want lots of tokens for maximum value.

What I'm saying is: Blade of the Bloodchief is a card that demands the deck be built around it, so unless you're trying to make it an Vampire Aristocrat -style deck, it should probably be cut.