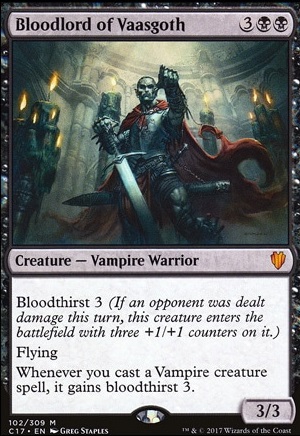 Bloodthirst 3 (If an opponent was dealt damage this turn, this creature enters the battlefield with three +1/+1 counters on it.)

Whenever you cast a Vampire creature spell, it gains bloodthirst 3.

Sympathy for the Devil
by RobbyTweedle

My first Recommendation over Bloodcrazed Paladin is Bloodghast the card is a lot of fun and incredibly powerful in aristocrats. with fetchlands in your deck you can get up to two free sacrifice triggers every turn that you can use with Skullclamp , Attrition , Mana Echoes , Altars, etc. Additionally, your playing entomb which can use go and find Bloodghast and start getting free value off of it.

Mycosynth Golem would be an absolutely devastating artifact commander.

Bloodlord of Vaasgoth and Vampire Nocturnus

I think Necropolis Regent, Malakir Bloodwitch, and Bloodlord of Vaasgoth can easily be subbed for any of your suggestions. You are absolutely right about Castle Locthwain. I'll be putting 4 in this deck. I think Drana, Liberator of Malakir and Sanctum Seeker would be my top subs. I think I'd consider removing some instances for 4 Knight of the Ebon Legion.