Werewolf creatures you control get +1/+0 and have trample.

Of Wolf and Man v2
by CherryBomb 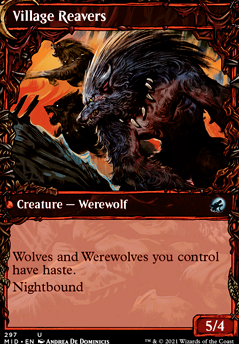 GoblinsBeatElves thank you for the feedback! I love your suggestions and already thought about Duskwatch Recruiter Â Flip, but was unsure. I included him and Game Trail as well, cut Hound Tamer Â Flip completely (thinking about it, the deck already had enough trample) and added two copies of Full Moon's Rise to give the deck at least some form of resilience against removal. This dropped the curve quite a bit, wich is always good in a fast format.

I thought about running Village Messenger Â Flip or Wolfbitten Captive Â Flip as my one drop... I'm still not certain which way to go, though I appreciate the mana sink of Wolfbitten Captive Â Flip quite a lot. I guess one could cut two Reckless Stormseekers and fill the slots with Village Messengers to drop the curve even further. I'll do some playtesting with that in the future!

Thanks for your great input!

I think this is pretty good if you're just intending for it to be a casual deck for teaching people. My nitpicks would be that Wicked Wolf seems kind of out of place, and you have no way to give it food; my other thing (this one is pretty minor), is that you don't have too much holding the tribal theme together. You've got Silverfur Partisan, Full Moon's Rise, Howlpack Resurgence, Moonlight Hunt, and Arlinn, Voice of the Pack as your "wolves-matters" cards, and three of those are being run as 1-ofs.

However, that's all getting into pretty nitpicky territory if you're just teaching people how to play. I like this as a starter deck.

1) Silverfur Partisan doesnât seem worth it... maybe better as a sideboard card. Destructive Revelry should defo only be in your sideboard and not the mainboard.

3) Howlpack Resurgence is garbage and you should aim to instead run more of your good cards like Full Moon's Rise . Iâd also ditch Domri, Anarch of Bolas as he just isnât useful (he doesnât help you if youâre behind, and doesnât help you stay ahead well either).

4) for sideboard, the main threats you want to be able to deal with is tron-lands, storm-like-spellcasting, artifacts, and graveyards. In your case you probably also want a way to prevent boardwipes. Damping Sphere is a great option, as is Scavenging Ooze and Tormod's Crypt .

Thank you for the critique! The advice is hella helpful. The Full Moon's Rise is definitely getting dropped. I think I was trying to accommodate the fact a lot of wolf cards also synergize with werewolves, but realizing I had less than 9 or so creatures makes slotting for them a loss for the deck. By accepting the token theme, that also means I can get rid of stuff like Door of Destinies and Herald's Horn since there are so few creature spells. I think I'm going for a full wolf token theme by the looks of it. Overrun and Inspiring Call is totally going in to protect from board wipes and having an extra finisher.

Thanks again for commenting and helping fix up this deck my dude!