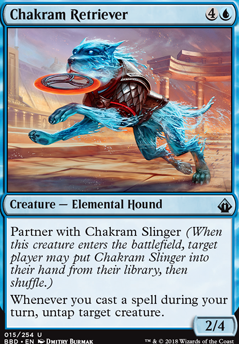 Whenever you cast a spell during your turn, untap target creature.

Chakram Retriever occurrence in decks from the last year

Public Emry Number One
by eprovince 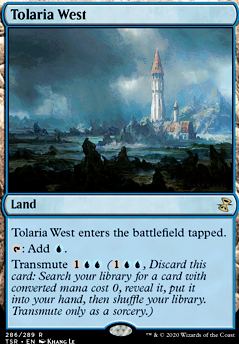 eprovince My first list had Thornbite Staff . It also included all of the 0 drop artifact creatures necessary to enable that game plan. In the long run, I found self-sacrficing 0 drop artifacts to be more consistent and to cut the staff and Intruder Alarm . I still think those two untappers are definitely good, but they are usually a nonbo with the noncreature artifact strategy. My untappers are limited to Isochron Scepter + Dramatic Reversal , Mirran Spy , and Chakram Retriever . The biggest downsides of Thornbite Staff are its high equip cost and the fact that it requires a sacrifice outlet to be effective. Hope this comment helps!

Oh and some finishers to consider:

Blisterspit Gremlin or Mirran Spy or Dwarven Patrol or Nettle Drone or Zephyr Scribe or Chakram Retriever + Retraction Helix or Banishing Knack = draw your deck. this works by playing the helix or knack on one of the untappers, then using that untapper's new bounce ability to bounce a 0 cmc artifact to hand, replay the artifact and repeat. Jhoira will draw the cards.

I came up with an idea for a deck, and after some research, realized that the deck was easily able to assemble a combo to win the game.

My question is: Should I focus on making the deck completely revolve around getting the combo as quickly as possible as consistently as possible, or should I have a high quantity of disruption to prevent my opponents from having their plans go through?

I know the answer is already, "It depends on the deck". However, maybe someone has a different opinion.

The deck has Horde of Notions as commander, with Jegantha, the Wellspring as a Companion.

The combo is to use Buried Alive to get Chakram Retriever, Bloodpyre Elemental, and Illuna, Apex of Wishes in grave. You will also want to tutor for Lightning Greaves and you will need at least one other Elemental (any Elemental) in your grave for the combo to work.

What you do is you get Jegantha from the Sideboard by paying, cast Jegantha, equip it with Lightning Greaves, tap it for mana, cast your commander Horde of Notions, either pass hoping nothing happens or have something like Dramatic Reversal, use Jegantha again and use Horde of Notions' ability to cast Chakram Retriever from grave. Then you just need to cast any spell (once) to finish them off. This untaps Jegantha, and now, because Horde of Notions CASTS the Elementals from grave, every time you use the Notions ability, you will get to untap Jegantha and just do it again.

Now you just revive Bloodpyre Elemental and the one other Elemental of any name, mutate Illuna, Apex of Wishes onto Bloodpyre, (the Horde allows you to mutate from grave because you're casting it, and therefore can pay the alternate cost), and Illuna does his thing once. Then you sacrifice Bloodpyre Elemental with Illuna mutated on, targeting the other elemental of any name to take the damage. If said elemental dies, revive it.

You can repeat the above, playing and sacrificing Illuna, Apex of Wishes until you hit Omnath, Locus of the Roil. Then you play him and kill him repeatedly with Bloodpyre Elemental, using Omnath's ETB to kill everyone else.

Anyway, I just wanted to know people's opinion on how viable a deck like this would be (the entire deck, as I envisioned, would be some tutors, some lands, the essential combo pieces, a few utility Elementals, and the rest of the deck ramp like Kodama's Reach, the deck being mostly Black (tutors) and Green (ramp)). Additionally, I would like to know what direction people think this deck should take.

I thought of this combo and thought that it was interesting/maybe useful enough to be worth sharing, so I posted it mostly for people's information/amusement.

Thank you for reading.