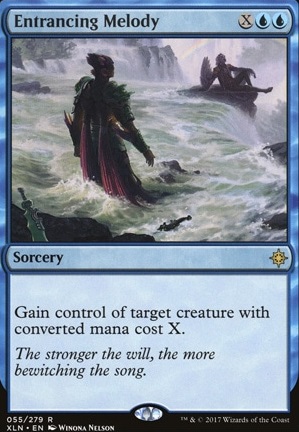 Entrancing Melody occurrence in decks from the last year

The most I saw on decklists were: Aether Gust, Engineered Explosives, and Mystical Dispute.

You can look here for current Modern top 8 Meta: mtgtop8.com

TristanTaylorsVoice Ral, Izzet Viceroy is definitely slower, it is just for grindier match ups. He can kill a lot of eldrazi that are running around with his minus which is nice right now. I might want to cut down on a [Magmatic Sinkhole] to add another The Royal Scions to help loot through my deck but Ral is actually very helpful.

match_lighter I haven't tried Entrancing Melody in a while so I will try it out here soon but I like Ral in the main or the side.

I don't believe Ral, Izzet Viceroy is pulling his weight, the worse you could do is replace it with another Remand . You might consider upping the number of Archmage's Charm to a full playset, or adding a single Ionize . A card that has proven quite powerful to me in izzet builds has been Entrancing Melody , although you already have Archmage's Charm the ability to scale with the game can come in handy.