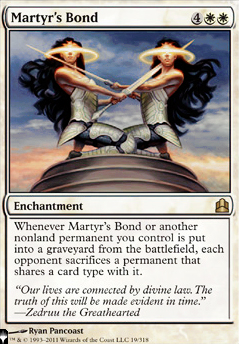 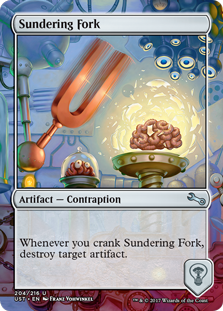 This was my favorite edh deck to play on Magic Online before I sold out of the software so I decided to build it in paper. Its great fun and it wins out of nowhere with relatively unusual cards and synergies. It's kinda like the modern format Hardened Scales affinity deck made a baby with a Mazirek, Kraul Death Priest EDH deck. Its a resilient aggro deck and it can win games quickly in a combo style fashion. Not an especially interactive deck, but it has good tutors and good removal to solve most problems. This deck also has another good thing going for it too. People often don't understand how to successfully interact with this deck. I get wins all the time from opponent's misplays because they didn't see the connections between the cards I have in play.

This deck is awesome to pilot. It sits there appearing to be doing very little until it wins in one big dramatic turn. Its fun & powerful and plays an unexpected strategy that can be very hard to stop or even understand. It's one of those decks that looks dumb as a list but plays really well because its all synergy cards. Like Arcbound Worker and Servant of the Scale are all-stars in this deck, honestly I wish I could run 20 of them. They seem underpowered in a vacuum but they are part of the glue that holds this deck together.

It's all about getting double Modular triggers

basically grants the Modular ability to everything (but without the artifact restriction), so the triggers stack up if he's in play whenever Modular dorks die. You also enhance the +1/+1 counter triggers every time this happens with cards like Corpsejack Menace and Hardened Scales. It gets out of hand real fast.

You make one of your creatures super huge and you attack with it, seems simple. Or maybe instead you sac it to a spell like Momentous Fall to gain a ton of life, draw a ton of cards, double all the +1/+1 counters while moving them over to something else ...and then you attack with a different even bigger creature. Unlike most self-sacrificing ("aristocrats") decks this one does not lose power and toughness in play when sacking big dudes, it actually increases it.

In order to fully support to the primary deck synergies around the Modular mechanic and all the other creatures that interact with +1/+1 counters and/or dying there are many things under consideration:

Silan Renn is useful for dumping +1/+1 counters on and attacking with, but also for sacrificing too. This is really not as much a Silas deck as a Reyhan deck, but Silas can be quite useful for the deck in many ways. Especially if he can actually deal combat damage and trigger his graveyard recursion, then he's fantastic. But even just as a piece of fodder, he's fine. We need creatures to win with this deck, and he's a fine one to have available.

Why did you leave out half of the Arcbound creatures?

They mostly just cost too much mana to use even in an arcbound tribal deck IMHO. This is not really a ramp deck and thats not what we want to be doing at that point of the game. Using expensive creatures for our army slows the main game plan down a bunch. We want the first part of the game to be playing an army, and the second to be using synergies and combos to win. I think they are fine includes if you have a slower meta or something I guess, but for me the fun of the deck is its explosiveness. Something that gets lost if you are including an abundance of slow cards like Arcbound Overseer. Maybe one or two overpriced arcbound idiots will make it back in some day, but the deck seemed to play better for me once they were cut back.

I just wish there were more cheap arcbound cards available in the game, like there isn't even a 3 drop one at all. What's up with that short sighted set design? EDIT: Welcome Scrapyard Recombiner!! Your presence was missed!!

Some games we build up an oversized army super fast (like a bunch of 5/5 or better creatures attacking by turn 5) and quickly outclass opposing blockers for quick kills. Those games the deck looks like some kind of crazy affinity-esque beatdown deck. If not it usually wins more like a combo deck a few turns later. After we build up a few or even one extremely huge creature its fairly easy to win. There are many spells to kill a player when we are in that position.

Here are the main cards that end those kinds of games (in no particular order):

The maybe board are cards that I'm considering or cost too much money but should be in the deck. Budget suggestions are most welcome!!

-On My Profile Sorted By Power Tier & ABC's-